Gwyneth Paltrow revealed that she suffered from post-partum depression after the birth of her son Moses. Read on to see how she figured it out — and why moms need to go easy on each other. 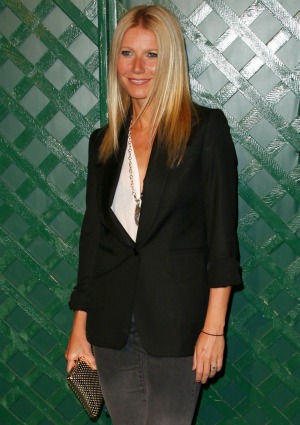 Her life seems so totally perfect and GOOP-ey it makes us want to puke, but it turns out that underneath all that juice cleansing and backyard herb growing, Gwyneth Paltrow is actually a flawed human being just like the rest of us.

In a new TV interview, the Academy Award-winning actress revealed that she suffered from post-partum depression after the birth of her second child, son Moses — but she refused to recognize the signs until her husband, Coldplay frontman Chris Martin, made her see.

“I couldn’t connect with my son the way that I had with my daughter and I couldn’t understand why,” Paltrow told Amanda De Cadenet on The Conversation.

“I couldn’t connect to anyone. I felt like a zombie. I felt very detached. I just didn’t know what was wrong with me. I couldn’t figure it out. It never occurred to me.”

Chris Martin finally made her see the light. “My husband actually said, ‘Something’s wrong. I think you have postnatal depression.’ I was mortified. ‘No I don’t!’ And then I started researching what it was and the symptoms and I was like, ‘Oh, yes I do,’ ” she explained.

One thing Paltrow wanted to stress is that instead of judging other women, we should be banding together as a means of helping and supporting each other.

“We think that it makes us bad mothers or we didn’t do it right, but it’s like we’re all in this together,” she said.

As nice as that sounds, it’s pretty much never like that.

“There’s a shame attached to it because if you say, ‘I had a baby and I couldn’t connect to the baby,’ it’s like, ‘What is wrong with you?’ ” she said.

Paltrow first revealed her battle with PPD in a 2010 GOOP newsletter.