Kourtney Kardashian says a panic attack is the reason she needed to skip to the front of the customs line at Los Angeles International Airport earlier this week. Others are saying she just feels entitled because of her last name. 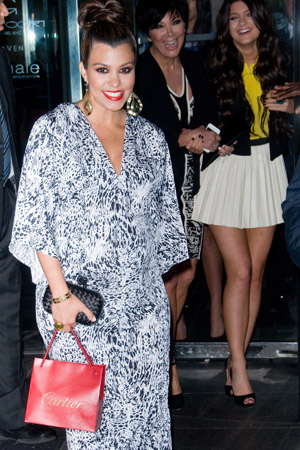 Kourtney Kardashian is getting close to giving birth to her second child with boyfriend Scott Disick. In related news, Jessica Simpson is carrying a 20-year-old in her stomach. Anyway, Kardashian is blaming this late-term pregnancy for a recent anxiety attack she had, conveniently, while waiting at customs at LAX.

“Here we are at LAX on my birthday after arriving home from a birthday trip to Mexico,” Kourtney, 32, wrote on her blog. “I have been claustrophobic just recently in my third trimester of my pregnancy. I had a small panic attack in customs when they stopped everyone in a tunnel. Looking behind me, all I could see was people and in front of me tons of people and I couldn’t even tell where the tunnel ended. I had to just run to the front of the line because I literally couldn’t breathe. It’s a horrible feeling and I’m hoping that it goes away after my pregnancy. I hate that feeling of being trapped with no control. Ahhh deep breath!”

Now, we’re not saying she didn’t have a panic attack, but we can’t help but wonder if she’s just saying that after people got upset. We’re not the only one — some commenters on her blog doubt her claims.

“Your share of the 40 million dollars should make you feel better,” one wrote.

Don’t worry, though — Kourt still remembers what she wore that day. Probably because she gets paid to mention these brands.

What we want to know: Why do they have so much luggage for three people? It’s vacation, not a fashion show.