30 Rock went live (again) and there were celebrity cameos galore. Last night, the cast and crew put on two shows for both coasts with a few surprise guests, including supposed enemies Kim Kardashian and Jon Hamm. 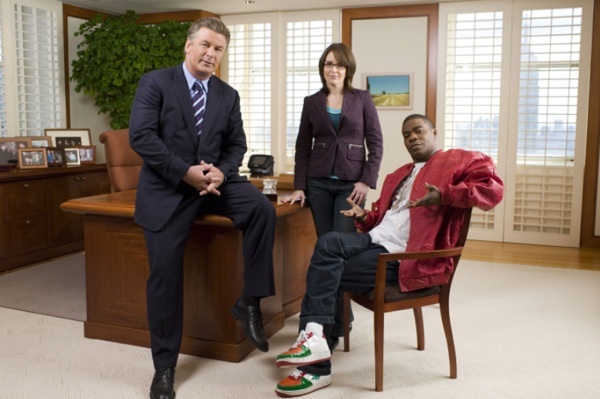 The cast of 30 Rock has done it again. They’ve dared to go where most traditional sitcoms won’t. They put on another live edition of the series, for both coasts. Viewers got to see two totally different versions of the show complete with switched-out cameos.

One of the most talked about moments of the night came from Sir Paul McCartney. The former-Beatle and music legend dropped by to give some face-time to Liz (Tina Fey) and Jack (Alec Baldwin).

While McCartney made a pit stop on the East coast, cable reality star Kim Kardashian stepped in for the West.

Mad Men hottie Jon Hamm appeared in a couple sketches including this hilarious, yet dated, breaking news segment. The actor played a sexist anchor, who couldn’t believe a woman had a job as a field reporter.

For the West coast airing, Hamm was replaced by real-life newsman Brian Williams, who added his own twist to the role.

Oddly enough, 30 Rock Live helped broker a truce between Kardashian and Hamm. Last month, the actor had some choice words about reality TV stars and their media takeover.

He told Elle U.K., “Whether it’s Paris Hilton or Kim Kardashian or whoever, stupidity is certainly celebrated.”

That was then, this is now. Hamm may be ready to make nice. According to E! Online, Hamm and Kardashian saw each other backstage at 30 Rock, and the actor was “beyond charming.”

Could their feud be officially over? Only time will tell.

What did you think of 30  Rock‘s latest live episode?