Kelly Ripa will be gracing our television screens on a weekend! The perky daytime host is taking over hosting duties at the 10th TV Land Awards on April 29. Check out how she’s getting prepared for the job. 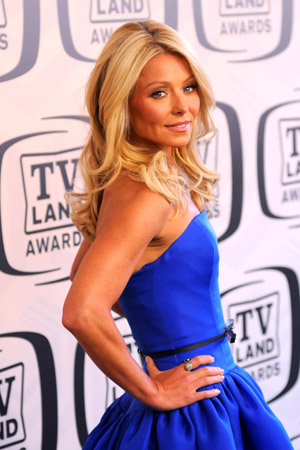 Kelly Ripa is back as host of the TV Land Awards this weekend — and she’s not the same person we see every day as the host of Live! With Kelly. Instead, she worked with former Queer Eye for the Straight Guy stylist Carson Kressley to come up with some looks for the show.

Those looks, of course, are of iconic TV Land characters from the ’50s up to present day, like Lucille Ball, Glee’s Sue Sylvester and New Girl’s Jess, to heroines like Wonder Woman. What will she ultimately choose to start the show? The sexiest of all television characters, of course: Catwoman.

Why is Ripa the perfect host for the show? She’s the biggest fan.

“I am a child of the ’70s, so for me, television was it,” she told The Huffington Post on the show’s red carpet. “That’s what we had. These characters were our lives and I get excited still. I’m still excited seeing Faith Ford as weird as that sounds. I still get excited.”

Her favorite show? “I love One Day at a Time,” she said. The ’80s sitcom received TV Land’s Innovator Award during the show, set to air Sunday on TV Land. “I used to wear my hair in two braids and Valerie Bertinelli had that flouncy hair. That’s all I wanted was flouncy hair. Before my mother would get a chance to braid it, I would comb it to the side and pretend I was Valerie Bertinelli.”

“Oh my god, how can you top an icon award?” a humbled Franklin said on the red carpet. “It’s very, very special. I don’t think you can.”

Watch Kelly Ripa get ready for the TV Land Awards

Which character do you like best on Kelly Ripa?