Community went above and beyond parody for last night’s Law and Order episode. It tapped into its inner procedural, and brought out both laughter and death. That’s right, someone on the show got the axe! 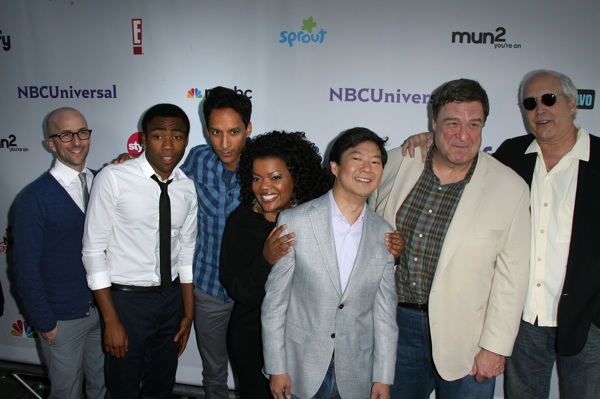 It’s the end of an era. The cast of NBC’s Community has lost one of their own. This week, the series killed off a familiar face at Greendale Community College — Star-Burns.

After the study group found out what happened to their sabotaged biology project, they were hit with another blow: Professor Kane (Michael K. Williams) received a phone call and announced Star-Burns was dead. Cut to black.

Entertainment Weekly, recently spoke to Star-Burns himself, Dino Stamatopoulos, who revealed why his character had to die.

“I’m not an actor,” he explained to EW. “There are certain acting roles that I don’t mind doing because I’ll write them and I’ll know how a specific character is supposed to behave. So in those instances, I’m comfortable with performing.”

Joel McHale shows us how to become a viral sensation >>

Stamatopoulos’ main job is as a writer and consulting producer on Community. When he stepped in front of the camera as Star-Burns during season one, he had no idea how popular he’d become.

“Yes, he’s been given funny lines, and I suppose the writers made him more like me eventually, but playing yourself is very difficult as well. I really don’t know how people perceive me. Obviously it’s as a scumbag, which is fair because I am, but that doesn’t mean I can play one on TV.”

He asked to be written out of the show, but didn’t know what direction the writers would take.

“I thought to myself, ‘If my character dies, I’d be in a very elite group of characters dying on a primetime network show,” he says. “So, that was definitely an attractive prospect for me. It would be me, Coach from Cheers (who really died, gulp) and that guy from Two and a Half Babies.”

Community creator Dan Harmon says Star-Burns’ exit will have a huge effect on the study group.

“Star-Burns’ death triggers the rest of the entire season in a strange daisy chain of events,” Harmon teases. “It’s not just thrown away.”