Felicity Huffman is all torn up over the Desperate Housewives finale. The actress blogs about the cast’s final table read together, and lists five things she’s going to miss the most! 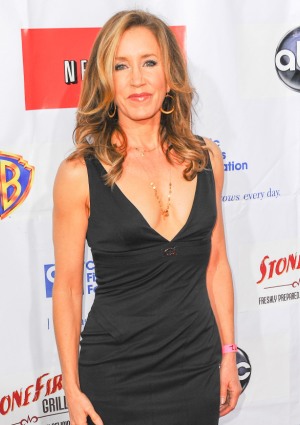 Desperate Housewives is coming to an end, and no one seems to be more upset about the closing of Wisteria Lane’s final chapter than Felicity Huffman. The actress has given fans an inside look at what the cast’s final read-through was like on Thursday.

For the very last time, Felicity Huffman has met with her fellow DH actresses and the writing team to read through a script. Not a regular script though, but the last episode of season eight — which is also the series finale of the entire show.

Describing the emotional meeting on her personal site, What the Flicka, the woman fans know best as Lynette Scavo admits she “cried all over” the writers.

Along with a makeup-free photo of herself, Eva Longoria and Marcia Cross, the 49-year-old wrote, “What a ride the last 8 years has been.”

Turning the nostalgia up a notch, Felicity Huffman also blogged a list of “mental snap shots” of what she’s going to miss the most. Five moments, written in her own words, read as follows:

— Eva’s laugh: Eva says “yes” to the universe and “How can I help?” to the world. She brings love, light and enthusiasm wherever she goes.

— (Tom Scavo) Doug Savant’s “good morning” as he walks into the trailer: He is always already in costume, he is sleepy, smells like soap, and when I see his handsome, kind face I know it is going to be a good day. He always makes me feel like I’m enough.

— Getting to act every day: I love the dance of figuring out how to perform a scene with the other actors and the director. I love the collaborative process and listening to my own instincts and intellect.

— Going to the “writers den” to talk about a scene: I love writers, and ours work so hard, it’s staggering. Can you imagine having a script due every eight days! I love talking to them about exactly how to act something, how to make sense of something, or what something really means. Doug Savant and I have talked with them a lot about marriage, divorce, family, children, in-laws and love in general. It is always fascinating and illuminating to hear the writers talk about Tom and Lynette.

— The family: Walking onto the set in the morning and seeing DH crew. Camera, grips, electric, props, wardrobe, script supervisor, assistant directors, directors, lighting. All of us coming together for a common goal, working to get it right, being efficient and laughing as much as we can.

Are you as sad as Felicity Huffman to see the Desperate Housewives finale quickly approaching?