Before being nominated for an Oscar, Gabourey Sidibe suffered a major letdown when meeting her idol, Joan Cusack. Rather than inspire, the veteran actress warned the newcomer to get out of town because of her weight! 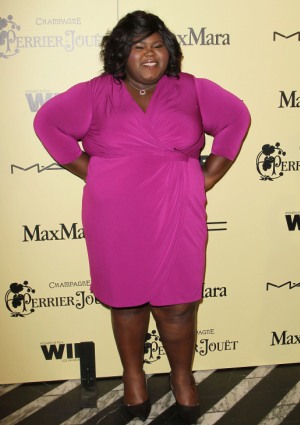 Gabourey Sidibe‘s favorite actress is — or at least was — Joan Cusack. Now the young star lists the veteran actress as the celebrity she was most disappointed by!

Appearing on Watch What Happens Live, Gabourey Sidibe detailed her insulting experience meeting Joan Cusack before she became famous for her Oscar-nominated role in Precious.

In the show’s “Plead the Fifth” segment, host Andy Cohen asked the 28-year-old star of The Big C, “What celebrity were you most disappointed by when you finally met them?”

Replying, Gabourey Sidibe reluctantly revealed, “What celebrity was I disappointed by? Oh, and it’s not in a mean way, because I know that she meant well. I met Joan Cusack, who is my favorite, favorite — I love her — but it was before I became [famous] or whatever.”

The Precious actress continued, “I was at some industry party, and she says, ‘Are you an actress?’ And I said, ‘Yeah!’ And she says, ‘Oh honey, you should really quit the business, it’s so image-conscious.'”

“I think she really, really meant it in a good way… but I was like ‘Oh, please don’t tell me to quit my job!'”

Well, shoot. Now we’re disappointed in Joan Cusack, too! Even if she meant well, and perhaps there was a grain of truth to her statement, you don’t have to lead with the balls-out truth within 30 seconds of meeting someone! Dream killer.

Good thing Gabourey Sidibe knew well enough not to listen. The actress will next be seen on film in Seven Psychopaths alongside Colin Farrell and Woody Harrelson, set to release late this year!

What do you think of Joan Cusack’s comments to Gabourey Sidibe?