It’s been a successful first run for New Girl, Fox’s comedy that puts the roommate moments of Three’s Company and the drinking games of Jersey Shore to shame. 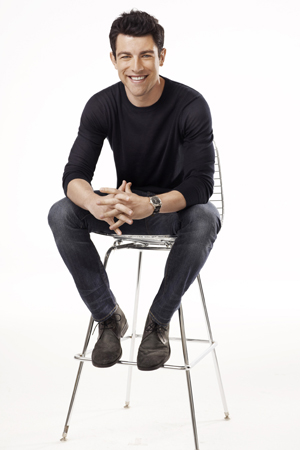 New Girl may have been initially centered around Zooey Deschanel, but viewers and gorgeous characters alike can’t help but gravitate toward Max Greenfield as Schmidt!

We talked with the often half-naked actor to get to the bottom of the loft’s three-way bromance and celebrate his success beyond Hollywood.

Schmidt and the sitcom

“I’ve gotten to do so many great things this year, and it’s so exciting,” said Greenfield, who partnered with Zevia to reduce the artificiality of the soda world and of everyday life. “It’s hard to ask for more!”

Greenfield looks forward to exploring Schmidt’s world in Season 2. “I’d like to get into Schmidt’s family and get more in-depth about his office situation.”

He promises a ton of tension for the remaining episodes of Season 1.

“Nick and Caroline’s relationship progresses, and he is on his way to move out of the house and move in with Caroline. That creates quite a stir around the loft, so it’s about how everybody reacts to that. But I think we end in a really fun, positive way.”

Stripping the artificiality of Hollywood

Guest star Dermot Mulroney has already testified that the New Girl cast is so spontaneously hilarious that it keeps everyone on their toes. And that’s how Greenfield likes it.

“When you’re an actor, you have to bring yourself to a character,” he told us. “When people get uptight or weird about it — sometimes, you’ll find actors who don’t want to do certain things and are so unopen to try things that are new, because they’re so scared of going against some version of what they think they are.”

He explained that such hesitancy doesn’t happen on this show, as so much of Schmidt’s personality is from Greenfield himself, “I find that when you jump in and try those things, and you get through the fear, you find a great solution, and a freedom.”

Raising a family on the red carpet

Schmidt may just be getting started (seriously, at least) with Jess’s best friend Cece on the show, but Greenfield himself is married with a 2-year-old daughter, who is also his biggest fan.

“We will drive down the street and there will be billboards for the show, and my daughter will shout, ‘Daddy!'” he told us. “When I’m not in a magazine, she’s confused! And I’m like, ‘How are you confused by this?'”

And though the Hollywood spotlight can be hard on some families, Greenfield isn’t letting his bear the negative effects, “We just concentrate on all the positive stuff. Our lives right now aren’t exactly [like] the normal household, but I try not to look at what the bad things are and what the potential pitfalls are. Everything’s really good right now, and I can only hope that it’s going to get better.”