SheKnows meets with Jason Segel and Emily Blunt, stars of the new romantic comedy, The Five-Year Engagement. Find out who wears the pants in this big-screen relationship. 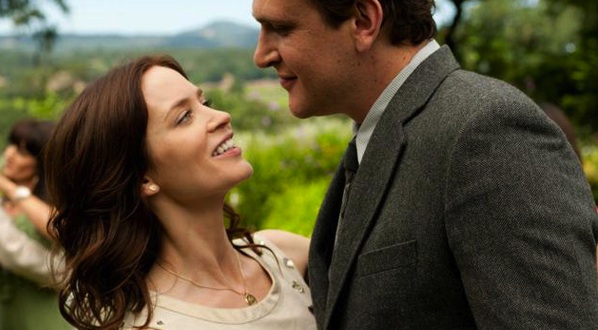 Talk to actors Jason Segel and Emily Blunt for only a few seconds, and you’d be hard-pressed to remember that the two charming stars of The Five-Year Engagement aren’t actually betrothed in real life.

“Can I have a sip?,” Blunt asks, eyeing Segel’s soda as they sit for our interview.

“You want a whole cup?” Segel offers. “Let me get you a cup of ice. How does that sound?”

“Nice,” she says. Then, with a smile, “This is how I like our relationship. Fetch.”

Segel and Blunt’s playful chemistry — that of good friends who clearly enjoy both a laugh and a challenge — warms the heart of their new film, The Five-Year Engagement, while never overstuffing it with gooey sentiment. For Segel, who co-wrote the picture with director Nicholas Stoller, Engagement was designed to be a raw and honest look at two flawed people for whom happiness is far from inevitable.

“I have always felt like most romantic comedies are incredibly predictable,” Segel says. “You look at the poster, and you know, well, those two are ending up together at the end of the movie. But there’s a legitimate section of [The Five-Year Engagement] where you’re not sure if Tom and Violet are going to be together. You’re not sure anything’s going to work.”

For Blunt, that sort of unpredictability and realism were key to Engagement‘s appeal. In a film she calls “one of the most personal stories I’ve ever done,” Blunt plays Violet, an ambitious post-doctoral psychologist whose ascending career (and relocation from San Francisco to snow-covered Michigan) creates friction with her fiance, Tom, played by Segel.

“This [relationship] felt awkward and loving and flawed and messy and everything that love actually is,” Blunt says. “I’ve always loved character roles, and I’m happier in them, so I look for [characters] that have some complexity. And, in this genre, it was a huge draw to work with Jase again, because we’re friends and his script was really fresh. It was collaborative, it allowed for a lot of improvisation and it was a blast. One of my happiest experiences.”

Segel and Stoller (who also co-wrote 2011’s The Muppets) spent five years plotting out the ups and downs of what would become Tom and Violet’s rollercoaster romance in The Five-Year Engagement. Throughout that development process, the star best known for his roles in Forgetting Sarah Marshall and How I Met Your Mother gradually realized this new film would test his range in ways few other experiences have.

“I like to be challenged, acting-wise, and I like to do things that I’m scared of,” Segel says. “So I do write scenes I hope I’m capable of doing… But I’m also aware Emily is a more prolific and better actress than I am. I come from a [competitive] athletic background, as you can probably tell — and, when it came to some of the more dramatic scenes [in this film], I would think, ‘I am not going to let her out-act me today!’”

Because Tom and Violet’s relationship delves so realistically into issues of sacrifice, separation, confrontation and self-doubt, much of the film’s most raucous comedy was left in the capable hands of co-stars Alison Brie (NBC’s Community) and Chris Pratt (NBC’s Parks and Recreation), as Violet’s sister and Tom’s best friend, respectively. The development of those two live-wire characters, Segel says, was vital to Engagement‘s ability to offer audiences a balanced emotional experience.

“I am very, very happy to be the straight man, ego-wise, in a movie,” Segel says. “I’ve played ‘the best friend’ before, and the job of that role is to come in and deliver a huge comedy pop, in every scene you do. That was the job of Chris Pratt’s role, and he knocked it out of the park. Every time our [main] storyline might bring you down a little bit, you want to be able to cut over to Chris Pratt and Alison Brie and be lifted.”

With its unique blend of comedy and drama, The Five-Year Engagement aims to challenge its viewers by offering a funny, sincere, unpredictable romantic comedy that captures the uneasy boundaries between professional independence and a life-long personal commitment. It’s a film Blunt believes audiences will find both refreshing and relatable.

“What’s clever about this [film] is that you understand everyone’s predicament, and I think you understand it at every turn,” Blunt says. “You don’t necessarily ‘side’ with anyone. You might see that Violet is following her dreams and is being tenacious about her own ambitions, but I think you always understand it’s not in a selfish sense. She is trying to make Tom happy, and he’s promised her that he would be happy. But you don’t know if they will be.”

The Five-Year Engagement walks down the aisle on April 27.