Glee happily honored Whitney Houston with a tribute episode and will soon feature Whoopi Goldberg as a guest. They aren’t thrilled about Lindsay Lohan, though. 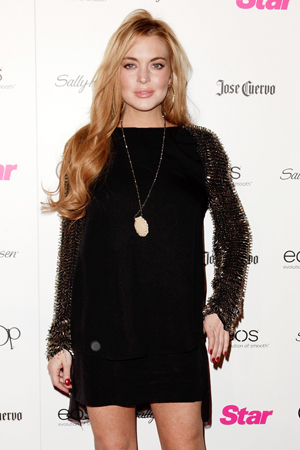 The season three finale of Glee is already set to be bittersweet. Not only are the McKinley High kids headed to Nationals once again, but they’re saying goodbye to their graduating seniors.

Add a difficult guest star like Lindsay Lohan into the plot and you’ve got yourself a new kind of nightmare.

Last week, one Glee source told E! News that the actress’ scene last week went “really great, she was so professional and it looked like everything was going to go so well.” Well, that was last week’s script.

“Lindsay was a total nightmare yesterday,” said a different source on the set. “She was three hours late in the morning, and when she did finally arrive, she just didn’t want to be there. She did not want to work. She had not memorized her lines, and she kept disappearing so no one could find her.”

The recovering party girl was so late that production sent a car to the Chateau Marmont hotel in Hollywood to haul her to work. Staffers refer to her as “That Girl,” adding, “She has rubbed them all up the wrong way by being so disrespectful of everyone else’s schedule.”

Lindsay’s spokesman Steve Honig attempted to clarify that the actress was late yesterday due to a “misunderstanding” about her call time.

“The production team came to us and said that they wanted to start [with Lindsay] right after lunch, which was at two,” he explained on her behalf. “They wanted to begin with Lindsay at three, so that meant she had a lot of time where she wasn’t doing anything. That’s why people didn’t see her. She was then in hair and makeup and began after lunch at three.”

However, Honig says it’s just another opportunity to kick the starlet while she’s trying to finally get back on her feet.

“This is utter B.S.,” he said. “This is a classic example of people trying to bash Lindsay. She busted her ass yesterday and is back on set again today.”

Despite these negative comments, another Glee source held a more positive attitude about the matter. “Everyone on Glee is still rooting for Lindsay. We had made a few jokes at her expense earlier in the show, and we really do want her to be able to succeed.”