Is Katie Holmes expecting another child with husband Tom Cruise? Yes, according to Star. However, the couple is denying the reports. What we want to know: How does Suri Cruise feel? 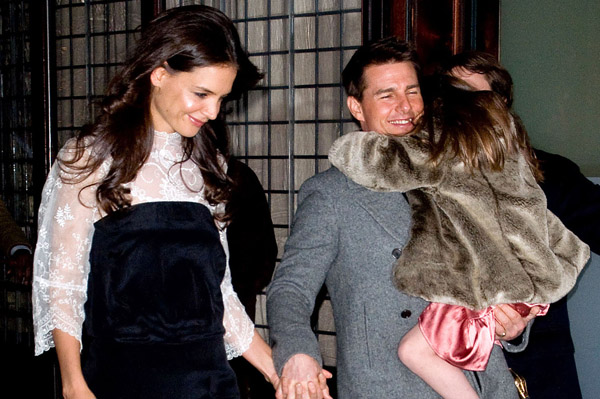 Are Katie Holmes and Tom Cruise ready to make Suri Cruise a big sister? Maybe, according to some new reports. “She’s struggling to contain the news,” a source told Star magazine of Holmes. “She can’t wait to be a mom again, and the sooner she can tell the world about it, the happier she’ll be.”

How does Diva Suri feel about this? She reportedly asked her mother, “if her baby sister was in Katie’s tummy!” another insider said.

“Katie laughed and whispered something in Suri’s ear.”

Okay, well Suri might be excited about it now, but we can’t imagine she’ll be pleased when her designer duds and luxe treehouses are handed down to a baby sister or brother. No one can fill her toddler stilettos — no one.

Luckily, she might not have to worry about it — the former Dawson’s Creek actress is denying the claims.

“She is not pregnant. It’s [a weekly magazine report]. Why would they be a credible source. It’s the same publication she sued last year and won,” a rep for Holmes and hubby Cruise said in a statement.

Who has time for pregnancy while planning a wedding? Isabella Cruise — the adopted daughter of Cruise and ex-wife Nicole Kidman — is rumored to be super serious with her boyfriend, Eddie Frencher.

“Eddie and Bella have been dating for some time, but have deliberately kept their romance under wraps. The couple decided to go public at Connor’s birthday party recently because Eddie and Bella have discussed marriage,” a source told the U.K. gossip rag The Daily Mirror in February.

Cruise is reportedly happy with the news, thanks to Frencher’s Scientology status.

“The fact that he is a Scientologist is obviously a boon, too. They’ll be Scientology royalty. They won’t be getting married anytime soon, but they are getting pretty serious, very quickly.”

We’re pretty sure Suri would be down for that — another opportunity to wear a pretty dress, of course!