Krysten Ritter may not be a “B” in real life, but Dreama Walker admits that she, like her character June, fell on her face when she first moved to New York City. 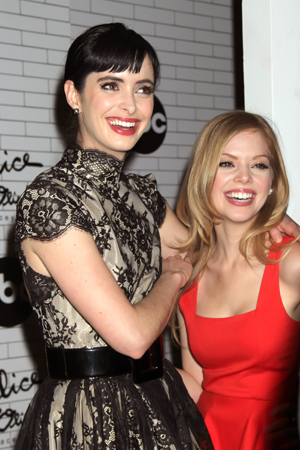 After just a few episodes of Don’t Trust the B—- in Apt 23, June and Chloe have had their share of ups and downs. But the actress who plays June says it’s completely necessary for her character to stand up to the “B” in the apartment.

“She doesn’t want to be stepped on or mistreated,” said Dreama Walker to The Hollywood Reporter. “She wants to let Chloe know right from the beginning, ‘Hey, this is who you’re messing with here; I might look like a doormat because I’m nice, but that doesn’t necessarily mean that I am.’ There’s definitely fight in June.”

The actress said that her initially wide-eyed character is undergoing a transformation into “New York June” as she gets acclimated to the Big Apple.

“June does her growing up in New York City and I moved to New York when I was 17 and I had no idea what I was doing,” explained Walker. “I really thought I was going to take that city by storm and it taught me a lot; it was like the school of life. For me, it was like a series of really hilarious experiences in New York with getting jobs and getting fired.”

Krysten Ritter: How to look good naked in Apt 23 >>

So when June fails, Walker feels that pain all over again as inspiration.

“Anytime June says, ‘I’m going to break the rules,’ she falls flat on her face and it’s the same for me,” she said. “It’s really funny to watch because Chloe can do the bad things like a thousand times and will never get in trouble but June will always get in trouble.”