One actor’s trash is another actor’s treasure. Rooney Mara is in talks to join Spike Jonze’s latest film for a part originally offered to Carey Mulligan. Unfortunately, Mulligan had to bow out, leaving her role ripe for the taking. 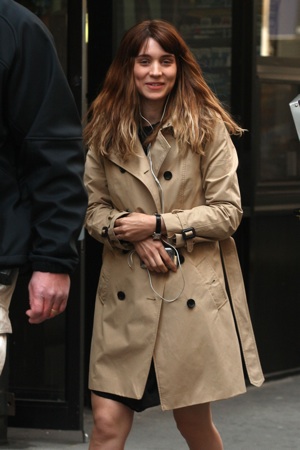 Spike Jonze lost one Oscar-nominated actress, but has quickly gained another. The director’s upcoming film was set to star newlywed Carey Mulligan, but she had to drop out due to scheduling conflicts.

According to Variety, Jonze found a worthy replacement in the form of Rooney Mara. Mara shot to fame last year for her breakout performance in David Fincher‘s The Girl with the Dragon Tattoo.

Movie review: The Girl with the Dragon Tattoo >>

The trade reports Mara is in final negotiations to star in the film, which centers on “a man who falls in love with the voice of a computer.” We’re not sure if Mara will be behind the voice, as her role is currently unspecified.

Dragon Tattoo’s Rooney Mara glams it up in Vogue >>

Aside from Mara, the cast includes Joaquin Phoenix, Amy Adams and Samantha Morton. The untitled film will mark Jonze’s return to feature directing. In 2009, he released Where the Wild Things Are, which was based on the popular children’s book by writer and illustrator Maurice Sendak.

Where the Wild Things Are rules the box office >>

Mara’s career is moving full speed ahead. Next she’ll star opposite Ryan Gosling, Christian Bale and Natalie Portman in Terrence Malick’s upcoming film (which is currently untitled), and she’s expected to reprise her role as Lisbeth Salander in the sequel, The Girl Who Played with Fire.

If that’s not enough, Mara’s currently shooting the drama, The Bitter Pill with director Steven Soderbergh.

What do you think of Mara replacing Mulligan?