Tamera Mowry shared some very special news with fans today: She and husband Adam Housley are expecting their first baby! Read on to find out how she broke the news to her twin. 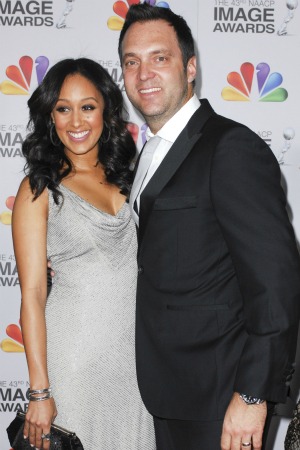 It seems like only yesterday that Tia and Tamera Mowry were growing up on our TV screens, but now Tia is a mom — and Tamera has just announced she is expecting her first baby, too!

Tamera broke the news in an interview with MyStyle.com.

“I’m so excited! I really am! I found out about three months ago that I was pregnant,” she revealed. “Honestly, Adam and I were in the ‘whatever happens, happens’ mode. Now, we are expecting a baby in November.”

“I really had no idea! It felt like I was going to get my period, but I didn’t get it. When I skipped two days, I thought, This is weird. So I took a pregnancy test and that was it,” she explained. “I was shocked at first. I kept looking at the double lines on the test. I couldn’t talk for two minutes. I kept saying, Oh my gosh! It was a feeling I can’t describe. It was the happiest I had ever felt.”

She broke the news to her husband via text. “I actually texted Adam a picture of two pregnancy tests and said, “Happy early Father’s Day!” He said, ‘Cooool!'”

Her twin, however, got an actual phone call.

“I told Tia over the phone. Her first words were, ‘I knew it!’ She could just tell. She had that twin intuition. She’s so happy. My sister always wants us to go to the park. Soon, Cree, Tia, my baby and I can have a park date! I love that our children will be about a year apart. It’s perfect. It’s like my cousin Jerome and me. My entire family is so elated!”