Call Brandy a murderer and you’re going to get a reaction! The singer broke down during a recent VH1 Behind the Music interview while speaking about her part in a 2006 fatality car accident. 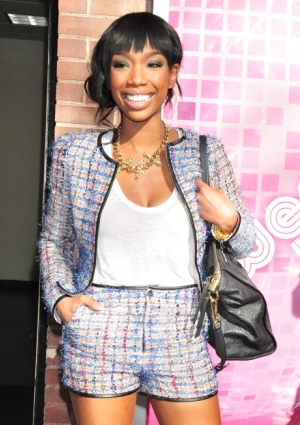 Six years after singer Brandy was involved in a car accident that took the life of Awatef Aboudihaj, the star has finally opened up. On the latest edition of VH1’s Behind the Music, Brandy spoke openly for the first time about that terrible day, and the gossip people spread about her still.

In a clip from the VH1 show, set to air April 25, Brandy told cameras with tears in her eyes, “I would hear what people would say, and still to this day they know that that’s a button. They know that they can call me a murderer or call me someone that killed someone. They know that is a button for me.”

“A murderer is someone who premeditates it,” Brandy went on to say, tears streaming down her face. “I didn’t wake up that day to be involved in a fatal car crash. I didn’t plan for that. And if I could take it back, I would.”

Brandy wants to be Whitney Houston >>

After Brandy’s 2006 fatal accident the Los Angeles city attorney’s office ultimately concluded that there was “insufficient evidence” to convict the singer of misdemeanor vehicular manslaughter. She was later hit with a $50 million lawsuit by the victim’s parents (which she settled out of court), as well as separate suits by the woman’s husband and then her children.

“I just wanted people to know that this wasn’t news,” Brandy continued of the accident. “It’s not something that should be talked about like it’s gossip. You don’t like me? Fine. But don’t use this situation to try to hurt me, because the guilt of being involved is enough. It’s something that I’ll never truly, truly get over. Ever.”

Check out the emotional clip of Brandy on VH1’s Behind The Music here!