Planning a wedding is stressful enough, but actress Drew Barrymore and fiancé Will Kopelman have picked a date that is less than six weeks away! 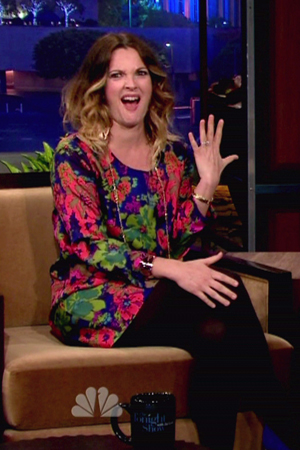 Drew Barrymore and her fiancé, Will Kopelman, are the next celebrity couple to be wed — probably because they’re choosing to tie the knot incredibly soon. The two plan to swap vows on June 2, according to E! News.

So what can guests expect at their shotgun wedding? The ceremony will be held at the actress’ estate in Montecito, California and will be conducted by Kopelman’s family rabbi.

“She wants it to be very personal and intimate,” said the source of Barrymore’s pending wedding. “She wants to do it right and be surrounded by family and friends.”

And though she herself has yet to confirm that they’re expecting a baby, the inside source clarifies that her bun in the oven is the main reason for the sped up wedding plans. The source states that the couple wants to be married before they welcome their first child!

“She wants to get married before her bump gets too big, but it’s important to her to marry before she gives birth,” the source explained. “Drew and Will have spent a lot of time talking to his family about ways to make the ceremony special.”

The actress has had quite the bumpy road when it comes to love, but the source says the trouble is all over now, thanks to Kopelman.

“Will is such an incredible man for her. They adore [each other] and are always together. He’s a good guy and he’s going to be a great father.”