Rihanna is shocked that she was included in the Time 100 list of the most influential people in the world. Read on to find out what she has to say about the honor. 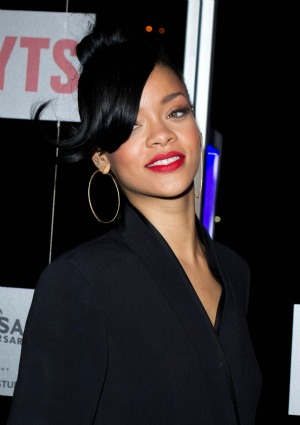 Rihanna made the Time 100 list of the most influential people in the world — but does she deserve to be included in such prestigious company? The star herself isn’t so sure, but she’ll take it!

The “We Found Love” singer expressed her delight with the designation last night at the official party.

“I was in shock, really, because it’s a very prestigious list and to be recognized by Time, that’s something that I’ll always remember for the rest of my life,” Rihanna told Access Hollywood at the Time 100 event in New York City on Wednesday night. “That’s something that you work toward, you know, you don’t even think about it ‘cause you don’t think it can ever happen.”

“You read the Time 100 List every year and to be a part of that list it, it’s such an incredible feeling,” she added.

But is her influence for better or worse? Some would argue that renewing her cozy relationship with ex-boyfriend Chris Brown three years after he was arrested for beating her up makes her a bad influence — but Stella McCartney begs to differ.

“She is one of the few people I know in that world of fame and celebrity who aren’t all about themselves,” the fashion designer said of her pop star pal. “She’ll give a real part of herself to an ordinary person she may meet, and that’s rare.”