What does Lindsay Lohan think of Rosie O’Donnell’s less than complimentary comments about her? Not much. Read on to find out her response to the hubbub. 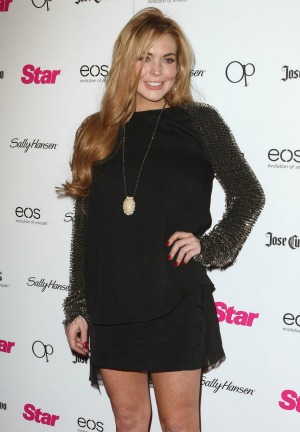 Lindsay Lohan doesn’t give a crap about what Rosie O’Donnell thinks of her new gig playing Elizabeth Taylor in the upcoming biopic Liz and Dick. She’s awesome and she knows it, and ain’t nobody gonna tell her no different.

“I think Rosie should focus on her own career and stop worrying about everyone else’s,” Lohan told E! News yesterday.

She spoke out against O’Donnell’s mean girl comments on the red carpet last night, too. “It’s funny that someone you don’t know at all can say something so intrusive and so knowing,” she told Access Hollywood at Star magazine’s All Hollywood event. “You know, I did one of my first interviews with [Rosie] when I was little. I was so excited.”

“I don’t think I need to tell her anything,” Lohan said. “I know that I’m great. I know that I know Liz Taylor very well, and I share the same makeup artist and the same hairstylist. We’ve worked with a lot of the same people.”

Obviously, if you have your hair done at the same place, you’re a shoo-in to play the role. Duh, Rosie.

Lindsay’s dad Michael Lohan was a bit more harsh with his response, saying, “Who the hell is Rosie O’Donnell to judge anyone, especially Lindsay, who has far more talent than Rosie ever had?”

Rosie O’Donnell has yet to comment on either Lohans’ defense tactics.

Lindsay Lohan is going to the White House

Lindsay Lohan in lukewarm water over hit and run