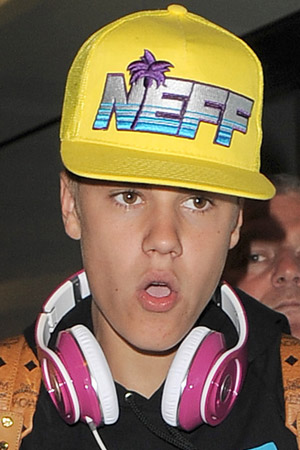 Justin Bieber’s millions of fans seriously need a new hobby, like paying attention in school or stalking One Direction. Why? Well, Beliebers — median age 12 — have created a nickname for Justin Bieber’s, uh, penis. They also had it trending on Twitter for the past several days.

“Little Bieber” earned the moniker “Jerry” from the fans — and now Bieber has adopted it, too.

Why Jerry, of all things? “I don’t know, it’s just what they named it,” Bieber added. “Jerry seems kind of like… ‘My name is Jerry.'”

Um, okay. This is just all sorts of wrong — and it’s absolutely disgusting to think about. Just, no.

He doesn’t seem too embarrassed by the whole thing — which is good, because his girlfriend gets embarrassed about the simplest of things. Case in point: Selena Gomez said the couple’s recent kiss during a Kiss Cam moment at a Los Angeles Lakers game was the most humiliating thing that’s ever happened to her.

“I thought those were funny,” Gomez said. “And they were doing, like, these little elderly couples and it was so cute, and then all of a sudden we were both looking up and then we come on and it’s like, oh, so awkward. It was so weird.”

You have a big wake-up call coming if you think kissing on camera is the most embarrassing thing ever. Ask any woman who has gone through labor — a kiss is nothing.