Johnny Depp is bringing a whole new take to The Lone Ranger‘s Tonto character. The actor explains just what the crazy makeup is all about — and just why, exactly, there’s a bird on his head. 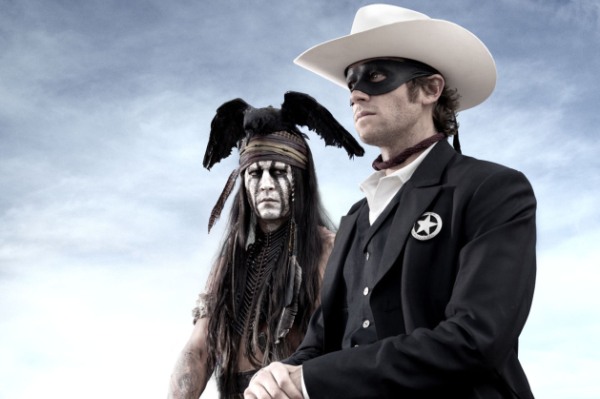 Johnny Depp is going all out for his portrayal of Tonto in the upcoming Lone Ranger film. One particular painting, by a Native American artist, is to thank for the inspiration behind Tonto’s new makeup and bird headdress.

“I’d actually seen a painting by an artist named Kirby Sattler, and looked at the face of this warrior and thought: That’s it,” Johnny Depp explained to Entertainment Weekly. “The stripes down the face and across the eyes… it seemed to me like you could almost see the separate sections of the individual, if you know what I mean.”

Johnny Depp saddles up in The Lone Ranger photo >>

Elaborating on those four lines running vertically on Tonto’s face, which symbolize a cross-section of the man’s emotional life, Depp went on to explain, “There’s this very wise quarter, a very tortured and hurt section, an angry and rageful section, and a very understanding and unique side. I saw these parts, almost like dissecting a brain, these slivers of the individual. That makeup inspired me.”

As for the bird on Tonto’s head? Please refer back to the painting, again.

“It just so happened Sattler had painted a bird flying directly behind the warrior’s head,” the 48-year-old actor said. “It looked to me like it was sitting on top. I thought: Tonto’s got a bird on his head. It’s his spirit guide in a way. It’s dead to others, but it’s not dead to him. It’s very much alive.”

“The whole reason I wanted to play Tonto is to try to [mess] around with the stereotype of the American Indian that has been laid out through history, or the history of cinema at the very least — especially Tonto as the sidekick, the Lone Ranger’s assistant,” Johnny Depp explained of intentionally altering the depiction of the character. “As you’ll see, it’s most definitely not that.”

Anyone else getting a bit of a Jack Sparrow from Pirates of the Caribbean vibe from Depp’s Tonto photo?

What do you think of Johnny Depp’s Tonto look for The Lone Ranger?