Has Katherine Heigl adopted a second baby? Sources say yes — so why is she keeping it a secret? Read on to find out what an insider has to say about her alleged new addition. 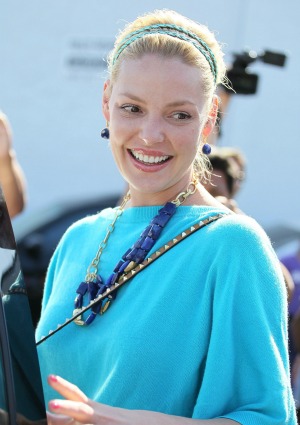 UPDATE: Katherine Heigl’s rep confirmed the adoption to People magazine today. “Yes they have adopted a baby,” said rep Jill Fritzo. “No further details [will be shared] at this time.”

Katherine Heigl already has one beautiful adopted daughter, but has she secretly added another to the family? One source says yes.

An insider told the National Enquirer that Heigl and her husband, musician Josh Kelley, adopted a second daughter in early April. This time, instead of going abroad like they did for their Korean daughter Naleigh, the couple kept it stateside and collected the then eight-day-old baby girl from Louisiana.

“The whole adop­tion process for Katherine and Josh’s second child was like a covert operation,” the source revealed to the Enquirer.

“As soon as they got the word the baby was born, Katherine and Josh flew from California to Louisiana to pick up their new daughter. But they didn’t want to let the cat out of the bag too soon about their new little girl.”

“To keep the whole thing under wraps, a friend sat with their baby five rows in back of them on the plane trip back to Los Angeles,” said the source. “Only a select few people even know their newborn baby’s name!”

Why all the secrecy? The insider said Heigl wants her new baby to acclimate to their home and family before exposing her to the public. Plus, she probably also has an exclusive deal with a tabloid for mucho dinero to debut the baby on the cover.

However, Kelley is having a hard time keeping his trap shut about their new addition. According to the source, the proud dad is telling all his friends, “I’m a dad again! Can you believe it? I’m so happy! I know there will be a lot of sleepless nights coming up for me and Katherine, but I don’t care. I’m tickled pink!”

The Buzz: Katherine Heigl and Josh Kelley adopt another baby!