Couples counseling, a code of silence and a fatal stabbing intersected in a lumpy and unsatisfying episode of Private Practice. 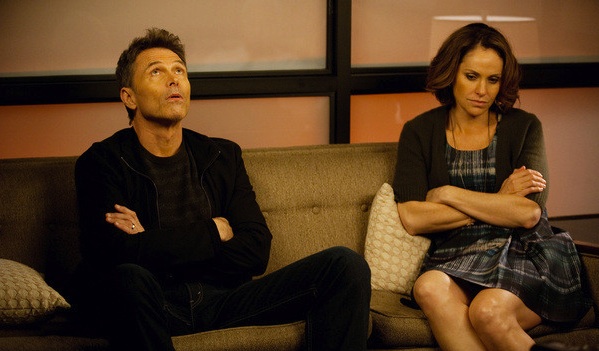 In a 2009 interview with USA Today, Shonda Rhimes (creator of Private Practice and Grey’s Anatomy) lovingly described Grey’s as “high school with scalpels.” Private Practice, she offered in that same interview, was intended to be a more “grown-up” representation of a life in medicine.

That mission statement seems to be a distant memory, as last night’s episode of Private Practice reminded us that — although this series is populated with presumably successful, well-educated characters who routinely save other people’s lives — many of the doctors buzzing around Seaside Wellness might feel more at home in the pages of a Sweet Valley High novel.

Take, for example, what passes for a love triangle between Sam, Jake and Addison. In last night’s not-so-gripping storyline, Jake confessed to Sam that he had kissed Addison on the night that she had discovered she was becoming a mother. Sam, responding to this news with all the grace and maturity of a rational, middle-aged man who is neither Addison’s boyfriend nor her husband, called Jake a “son of a bitch,” dropped his basketball to the pavement and marched off the blacktop.

All because of a kiss? Dry your eyes, Taye Diggs. You’ll be okay.

Both men inexplicably turned to Pete for advice, though he was of curiously little help to either side of the dispute. To be fair, though, Pete was busy spending most of the hour in couples counseling with Violet. That plotline was fraught with its own remarkably generic, non-medical drama, as Pete accused Violet of being controlling and Violet accused Pete of being emotionally unavailable. Didn’t we, and they, know all of this already?

Somehow, against all odds and reason, the therapy session worked. In the end, Pete told Violet, “I just want to love you,” they got down to kissing, and their doctor expressed confidence that these crazy kids were going to be just fine. Then he no doubt charged them an exorbitant fee for his expert services.

Meanwhile, Charlotte and Cooper dealt with the aftermath of Erica’s passing and, specifically, with Mason’s refusal to speak to anyone. The two immediately disagreed on how best to approach Mason’s new code of silence: Cooper insisted that his son be allowed to grieve in whatever way he chooses (even if that includes bed-wetting and a need to sleep with beloved grown-ups), and Charlotte directly confronted Mason about his behavior and encouraged him to share his feelings.

Charlotte’s approach worked, albeit briefly, and Mason finally admitted terror at the realization he’s already beginning to forget things about his dear, departed mom. This was a nice scene — and a very astute, human development in an episode with far too few of them.

Addison and Amelia experienced their own unique brand of friction when Addison, through an ultrasound, discovered that Amelia’s unborn baby has no brain. This revelation caused Amelia — now deeply jealous of Addison’s newly acquired motherhood — to fire Addison as her OB/GYN and keep her at a distance.

Near the episode’s end, Amelia revealed to Addison that she hated her (and shared plenty of other heated, irrational things, as well), before being consoled to great effect by Charlotte. In an episode filled with high tempers and emotional outbursts, Charlotte was one of the few characters last night who consistently rose above the fray. But even after her cool down session, Amelia still despised Addison for having what Amelia cannot.

And in the hour’s only storyline with much medical meat on its bones, Violet and Pete were saddled with the case of a 9-year-old girl with multiple, brutal stab wounds. The patient (who, coincidentally, was later declared brain dead) was grieved by her loving parents but, suspiciously, not nearly as much by her sister, Missy. Thanks in no small part to her own personal history with horrific stabbings, Violet was able to read Missy’s emotional detachment as a warning sign, and eventually got the kid to admit to having stabbed her sister to “feel what it felt like.” Missy was immediately arrested and hauled off.

That last plotline dovetailed nicely with Amelia’s, as the brain-dead patient inspired her to donate her unborn child to science.

Oh, and that whole Addison-Sam-Pete love triangle thing? As it turned out, Addison got as bored with it as I did. At the end of the hour, Jake and Sam horsed around in front of the television while Addison paid them and their persistent neuroses no mind at all. “For the first time in forever,” Addison told Violet, “I have exactly the man that I want.”

She was, of course, referring to her new baby.