Octomom Nadya Suleman is under investigation for child neglect after a hairstylist reported deplorable conditions in the home of her 14 kids. 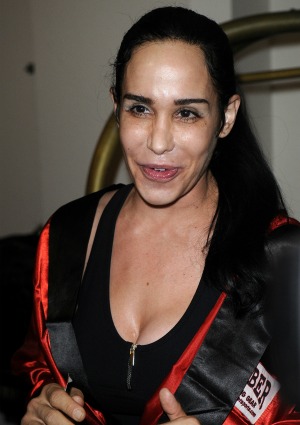 Is Octomom neglecting her 14 kids? Her hairstylist thinks so — and she was so concerned that she called the cops.

According to TMZ, the La Habra Police Department and the Orange County Department of Family and Children’s Services showed up on Nadya Suleman‘s doorstep Tuesday night to investigate the hairstylist’s claims — including that there is only one working toilet in the house because the others are broken and some of the kids are resorting to pooping in potties in their bedrooms or the backyard, that Suleman often locks the kids in their bedrooms so she can attend to personal matters, that the kids are malnourished and unbathed, and the house is a mess.

Gross-out of the day: Octomom bares her belly >>

Witnesses overheard Suleman telling the authorities, “Excuse the graffiti,” as she ushered them into her home.

Unanswered is how Octomom can afford a hairstylist who makes house calls when she is on welfare.

Naked Octomom wants you to know she’s a great parent >>

Cops and child advocates spoke with Suleman, took a look around the house and the kids and left without removing any children from the home. But Octomom is not completely off the hook yet: Children’s Services will follow up, and authorities say they will continue to investigate.

This marks the latest in a series of problems for the desperate mother. Since admitting to receiving $2,000 a month in welfare payments — after insisting for years she would never accept public aid — Suleman has reported receiving death threats and has been the victim of vandalism.

Read on for more Octomom

Nadya Suleman’s nude “corpse” photos creep her out, too