Jack Osbourne is a bleepin’ dad today after his fiancee Lisa Stelly gave birth to their daughter. So what’s the name? 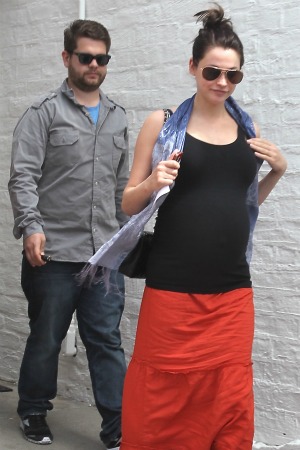 There’s a new princess in the world of rock royalty today. Jack Osbourne — son of metal legend Ozzy Osbourne — and his fiancee Lisa Stelly have welcomed their baby girl into the world!

Jack’s sister Kelly Osbourne confirmed the news on Twitter, also. “Thank you so much for your congratulations but they realy should be gonig to @lisamarstelly & @mrjacko! [sic],” she wrote. “I am one proud Auntie!”

Jack and Lisa announced their engagement in September, just weeks before revealing their baby news to Piers Morgan. “I’m going to be a dad,” he shared. “I’m excited. I’m a little nervous.”

He later told Britain’s Star Magazine, “I’m excited. It’s a very good thing. It wasn’t planned, if that tells you anything…”

“I’m just really happy about the whole thing. It’s going to be a new chapter in my life and I’m excited about it.”

Neither Ozzy nor Sharon Osbourne have commented on their darling granddaughter as of yet, nor word if little Pearl will be characterized on the family’s upcoming animated show The F’n Osbournes.

Read on for more of the Osbournes

4 mins ago
by Delilah Gray