Justin Bieber is determined to have the last word about the baby mama drama surrounding Mariah Yeater. Thanks to the paternity case, when the pop idol’s new album debuts fans worldwide will be getting an earful. 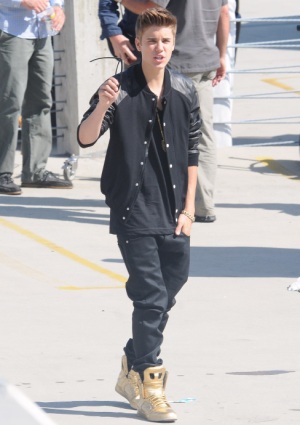 Mariah Yeater shocked the world by claiming she gave birth to Justin Bieber‘s baby last year, and now he’s let his true feelings about “that girl” be heard loud and clear. The 18-year-old megastar reveals his new album Believe has a track inspired by the baby mama drama.

“There’s a song about that girl — Mariah Yeater — that said she was gonna have my baby,” Justin Bieber said Monday during an interview in London.

“There are songs about things I’m going through,” the boyfriend of Selena Gomez went on to add of his new album, due out June 19. “I wrote songs about different situations.”

Though Justin Bieber didn’t initially speak out much when Mariah Yeater claimed he’d impregnated her backstage at one of his concerts, he seems to have plenty to say now.

Just two days prior to revealing there’s a baby mama drama song on his new album, Bieber taunted Mariah Yeater via Twitter. “Dear mariah yeeter,” he wrote, “we have never met…so from the heart i just wanted to say…” Included was a link to a clip of Sacha Baron Cohen’s Borat character repeating “You will never get this.”

It was last October that Bieber was accused of fathering her child, which he vehemently denied. Speaking briefly about this situation at the time the 17-year-old said, “I know that I’m going to be a target, but I’m never going to be a victim.”

Are you anxious to hear Justin Bieber’s Mariah Yeater song?