Lindsay Lohan is going from the Big House to the White House, thanks to Fox News personality Greta Van Susteren. What we want to know: Will La Lohan wear an appropriate outfit in the presence of President Obama? 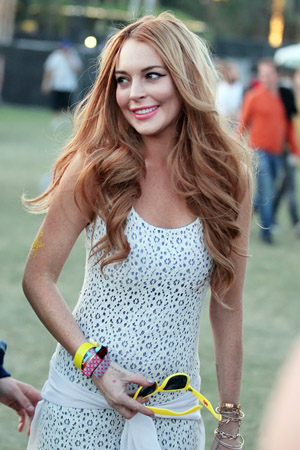 Watch out, Washington D.C. — Lindsay Lohan is coming for you! The Liz & Dick actress is set to make an appearance at the White House Correspondents Dinner on Saturday night as a guest of Fox News anchor Greta Van Susteren and her husband, John Coale.

What’s the connection between the two? Your guess is as good as ours.

Still, we can’t imagine that Lohan would give up an opportunity to be seen in such a coveted party — especially because she wouldn’t likely get invited on her own. Our big question now: Will she show up in an appropriate outfit with a decent hairstyle? Also, will she manage to avoid club fights while she’s there?

We can’t wait to find out!

Also, we can’t wait to find out what Rosie O’Donnell has to say about this. The outspoken talk show host blasted Lohan on Monday, calling her fans “crackheads.”

“I feel very sorry for her,” O’Donnell said of Lohan. “I think she needs a lot of time away… She’s had a lot of trouble doing every single movie, including SNL. She was out and not in rehearsal. I think she’s not in a place to work.”

The redhead hasn’t responded to the comments — but her father, Michael Lohan, didn’t pass up the opportunity to get some press.

“Who the hell is Rosie O’Donnell to judge anyone, especially Lindsay, who has far more talent than Rosie ever had?” he told TMZ before launching into another tirade against the engaged O’Donnell. “Two failed talk shows, a failed marriage, etc… He/she who is without sin may cast the first stone.”