President Obama stopped by Jimmy Fallon’s show on Tuesday to talk about the re-election and do a little jammin.’ Find out what he has to say about the state of student loans. 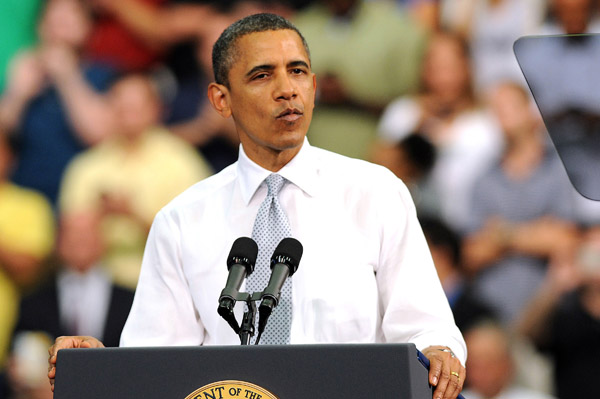 President Barack Obama is hot on the campaign trail for his 2012 re-election bid and what better way to attract the youth vote than with a visit to Late Night With Jimmy Fallon? The prez made an appearance on the show during a stop at the University of North Carolina at Chapel Hill.

He didn’t just talk about policy, though. Fallon and his house band, The Roots, got Obama to participate in their “Slow Jam the News” sketch that they usually do with NBC Nightly News anchor Brian Williams.

The bit featured President Obama talking to the camera about issues like student loans. “Now is not the time to make school more expensive for our young people,” Obama said.

Then Fallon piped up with the slow jam part.

“Ohhhh, yeaahh. You should listen to the president,” he crooned.

President Obama has made quite the rounds on the late night talk show circuit — he’s the only sitting president to have appeared on The Tonight Show With Jay Leno, The Late Show With David Letterman and Jon Stewart’s The Daily Show.

The prez sings sexy songs to Michelle Obama all the time >>

During his monologue, Fallon made reference to the Secret Service prostitution scandal, saying that he was “having the best time” hanging out with them backstage.

Obama toed the line about the whole thing, though he did insult the responsible agents.

“A couple of knuckleheads shouldn’t detract from that they do,” he said of the Secret Service. “What they were thinking, I don’t know. That’s why they’re not there anymore.”

As for his presumptive opponent, Mitt Romney? Obama said the two are “not friends,” but that he “seems like somebody who cares about his family.”

The Buzz – Barack Obama Slow Jammin’ with Jimmy Fallon!
Barack Obama made an appearance on Jimmy Fallon Late Night, slow jammin’ the news on his stance for this coming election.