What do Noah Wyle and George Clooney have in common — besides starring in ER? They were both arrested in Washington D.C. for protesting against social injustice. 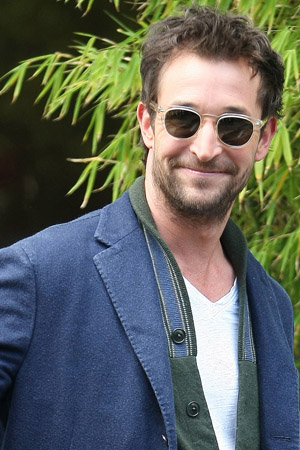 Apparently George Clooney’s humanitarian side rubbed off on his former ER co-star Noah Wyle. The Falling Skies actor was arrested — with about 100 others — during a protest Monday in Washington D.C. The Los Angeles-born actor was there in support ADAPT, an organization aiming to stop cuts to Medicare.

Wyle was pretty proud of his efforts, too.

“As soon as everybody saw me being led away, they let up a big whooping cheer, which made me feel really good,” Wyle told the Los Angeles Times after his arrest, adding that he thinks his kids are “proud of the old man right now.”

Wyle joins his former co-star as the latest celebrities to get arrested while protesting injustice in our nation’s capital. Clooney was arrested in March outside the Sudanese embassy for protesting against Sudanese President Omar Hassan Ahmad al-Bashir and the extreme starvation his people have suffered under his rule.

His goal? He wants to get China involved with the humanitarian efforts since the Asian country gets much of its oil from the area.

“There is a great interest in working with China, not in any adversarial relationship, but actually working together for their own economic interests since China is losing a considerable amount of money in oil revenue right now,” Clooney told reporters outside the White House after meeting with President Obama. “So there seems to be a unique moment and a unique time to be able to act on some of that.”

Celebrities targeted by the KONY 2012 campaign >>

“China who gets six percent of its oil imported from the Sudan, suddenly this affects their economy,” Clooney said. “It affects our economy in terms of oil because if China isn’t getting six percent of oil from the Sudan, they’re back on the market with us, which raises the price of gas for us. So for a moment, there is a moment that we can appeal to China.”

So, does Wyle hope to follow in his pal’s footsteps? Kind of.

“Let George focus on the international,” he said of Clooney. “I’ll deal with the small domestic issues.”