In her first TV appearance since her OWN talk show was canceled, Rosie O’Donnell came out swinging — and placed her aim directly at Lindsay Lohan. 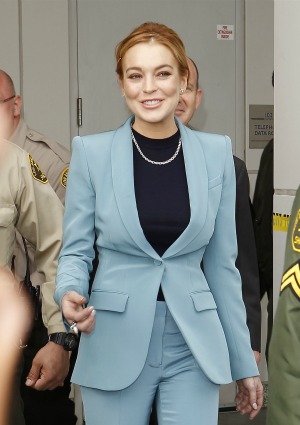 Lindsay Lohan is totally psyched that someone actually gave her a job and she’ll be playing famed film icon Elizabeth Taylor in an upcoming Lifetime biopic. Rosie O’Donnell is not quite as psyched about the news.

Appearing as a panelist on The Today Show, O’Donnell ripped the young actress and everyone who disagreed with her opinion on the casting.

“I feel very sorry for her,” said O’Donnell, starting off mildly. “I think she needs a lot of time away… She’s had a lot of trouble doing every single movie, including SNL. She was out and not in rehearsal. I think she’s not in a place to work.”

Disagree? Rosie doesn’t want to hear it, because you’re obviously a crackhead. When fellow panelist Donny Deutsch dared express his thoughts that Lohan is “our generation’s Elizabeth Taylor,” O’Donnell ripped him a new one.

“You’re out of your mind! You’re a crackhead! The last thing she did good she was sixteen,” O’Donnell snapped.

Good thing Rosie isn’t working in the casting department at Lifetime. This TV movie will give the network huge ratings if only because Lohan is in it.

Liz & Dick will explore the torrid relationship between Taylor and her longtime love and two-time husband Richard Burton during the making of Cleopatra. It will be Lohan’s first movie since 2010’s Machete.

Read on for more Rosie O’Donnell