Dakota Fanning is making the most of her newly minted membership into adulthood. The beloved child actress is all grown up, and is busily planning out a fresh path for her future. 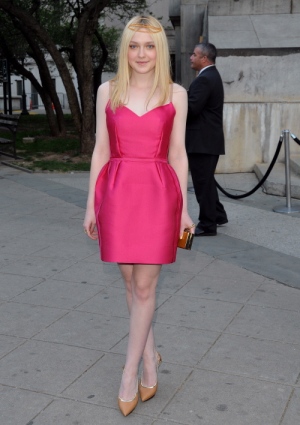 Dakota Fanning is now two full months into her adult life, and thus far has only made her parents (and the public at large) swell with pride. But what’s this we hear about changing her image now that she’s over 18? Say it isn’t so, Dakota!

The actress, who started attending New York University last fall at the age of 17, recently explained to California Style magazine, “I’m not going to school for a career. I’m going for my own interest, for myself.”

Fans fearing Dakota Fanning might disappear from film in pursuit of another career option need not worry, however. Referring to acting the college freshman assured, “I already know what I want to do forever.”

Dakota Fanning’s latest project, the period drama Effie, tells the story of teenage bride Effie Gray, who disastrously wed Victorian art critic John Ruskin. Noted as the 18-year-old’s first adult role, the actress’ lack of experience with romantic love in her personal life proved to be a help, not a hindrance in bringing her character to life.

When asked if she’s ever been in love, Fanning told the magazine, “Ahh, not really. No. I would have to say no… but Effie wasn’t really in love with her husband, either, which made [filming the movie] easier.”

As for having celebrated her 18th birthday on Feb. 23, it’s safe to say Dakota Fanning feels a sense of liberation. “I feel like this new chapter as an adult is almost like starting over,” the young star commented. “That’s the interesting part about getting older in this business. I’m excited to present myself differently.”

Understandable — but let’s hope not too differently! Don’t we all love Dakota Fanning just the way she is?