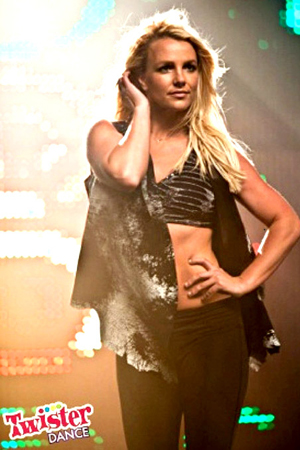 No one can rock a sports bra like Britney Spears can. From the music video of her breakout hit “Baby One More Time” to her tweets of new ads for Twister Dance, the pop princess looks great in workout gear once again.

Yes, it’s true. In this picture that Spears tweeted from the set of her ad campaign for Twister Dance, the singer is sporting an exceptionally expensive piece of fashion. According to Fashionista, the Eternal Love Bra is from fitness brand BodyRock, designed by LA-born fitness buff Kelly Dooley.

Though it appears to just be black and silver from the photo, the Eternal Love Bra is made out of silk and equipped with an 18-karat gold zipper, a removable, 18-karat gold tassel with diamond-eyed skulls and hand-cut Swarovski crystal hearts. And those “stripes” on the front? They’re on the back too, and they’re actually silver diamond Swarovski crystals and gold pyramid studs.

Dooley says she “didn’t want a sports bra that looked like prison wear,” so she was inspired to design the BodyRock line.

“After completing my first marathon, I started to create the beautiful array of what we like to call ‘Style-wear’ — it is all too beautiful to be called sportswear, yet it is constructed to take you through a triathlon!” And it looks like it held up well through a few games of Twister Dance — for that price, it really should!