What’s it like to go on a super hero holiday with your favorite comic-book icons? A lot like going to see The Avengers in 3-D, I’ll bet! Iron Man, Captain America, Thor, Hawkeye, Black Widow and The Hulk inspire loads of fun as they smash, bash and clash against the evil alien Loki and his squadron of killer spacecrafts. 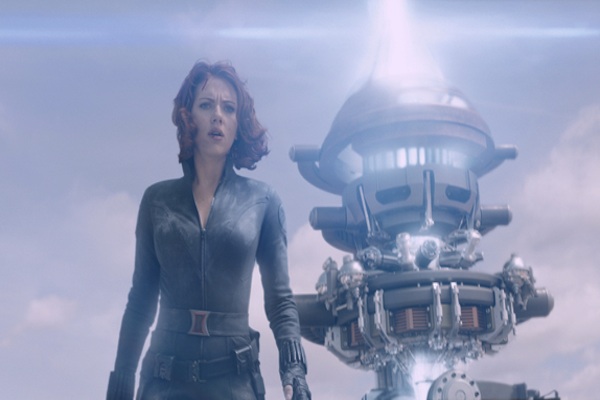 By far, my favorite character out of the entire Marvel collection is Black Widow, played by the sensual Scarlett Johansson. A spy with a passion for physical combat, Johansson, with the help of her stunt double Heidi Moneymaker, fights in the style of Wushu, a dazzling form of Chinese martial arts. The movements are fluid and acrobatic, both feminine and masculine in style. But inventive weaponry has also been added to the mix and it’s thrilling to see this beauty kick some serious booty.

Upping the conflict in the story, The Avengers pits brother against brother when Thor, the god of thunder (Chris Hemsworth), must help prevent sinister sibling Loki (Tom Hiddleston) from taking revenge not just on him, but on our entire planet. Even in a wig, Hemsworth is a super-babe with his biceps bulging as he wields a hammer called a Mjolnir. Uh, hold on while I check YouTube to see if they have that sequence on a loop… darn, not yet. Anyway, Hiddleston delights as his “adopted” brother Loki, and is electric on film. He’s sexy and dangerous but also mega-menacing, especially wearing those Nordic horns that make him resemble a rabid reindeer.

Mark Ruffalo plays the mild-mannered Dr. Banner, the dude we all know has a dark (or should I say dark green) side. Ruffalo plays this modern-day Dr. Jekyll as a guarded, angry man. But it’s not his bitterness we love to watch — it’s the unavoidable transition from man to monster, with emerald muscles in full ‘roid-rage that makes juice-head Ronnie from Jersey Shore look like a pip-squeak.

The Avengers is at its best, however, with the dry sarcasm masterfully provided by Robert Downey Jr. as Iron Man, who openly admits he doesn’t “play well with others.” There is plenty of witty dialogue and laugh-out-loud moments, particularly between he and Thor. Thor says, “We need a plan of attack!” Iron Man replies, “I have a plan: attack!”