Kim and Khloe Kardashian have admitted to one vice and one vice only: The internet. And if you think they’re not reading your nasty tweets about them, think again. 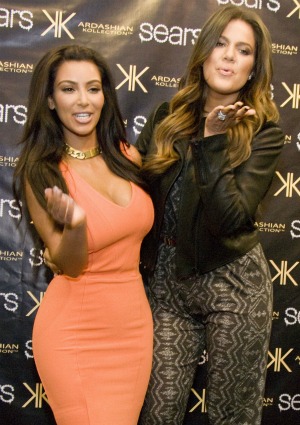 If you want to catch the attention of the Kardashians, all you have to do is write about them on the internet. In a new interview with Papermag, Kim Kardashian and her sister Khloe said they are total web addicts and that people who say nasty things about them are stupid.

“I love writing them back. People will write me, “My phone battery lasts longer than Kim Kardashian’s marriage,’ and I’ll write back, ‘Oh, which phone is that?'” Kim told Papermag.com.

“When people are so stupid, you just have to have fun with it. Someone [without a profile photo] will say I’m fat, or a hairy Armenian, and I’ll write back, ‘Oh, that egg picture of yours is so gorgeous,'” she explained, referencing the generic Twitter profile image.

Despite sometimes causing controversy with tweets, Khloe said nothing she writes gets deleted — but the same can’t be said of another Kardashian.

Khloe and Kim Kardashian get a case of road rage >>

“I don’t delete things. You look like such a little punk when you delete things,” Khloe Kardashian said. “Our brother Rob deletes almost every tweet and follows people and then unfollows them. If he’s in the mood to just date random people, he follows them, then unfollows. He unfollows me like once a month. He’s bipolar on Twitter.”

All goofing around aside, Kim said the whole family knows how important social media is to their brand, and they take it very seriously.

“I think a lot of our fan base and a lot of our connection with people is internet based. I think that the internet has brought on a different kind of celebrity. We are very well aware of who we are and what our place is. We are so active on Twitter, on our Facebook pages, we are writing back, we are connecting. We enjoy it,” she says.

Read the complete interview with Kim and Khloe Kardashian on Papermag.com.