The Pirates! Band of Misfits is a fast-sailing ship of fools, scientists and even the last living dodo bird. This kooky voyage will have the whole family giggling while discovering some of the lesser known stories from this fanciful version of history. Did I mention it’s in 3-D? 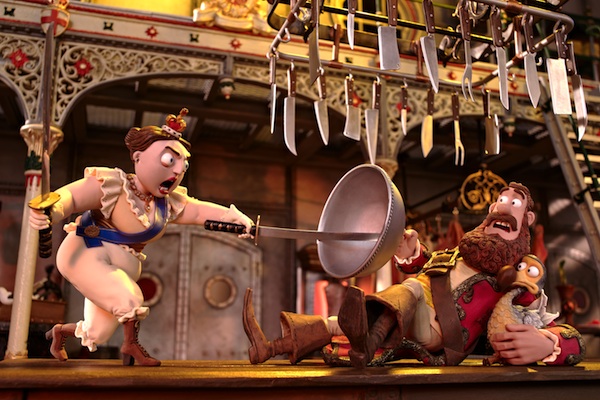 Hugh Grant is charmingly doltish as the voice of the Pirate Captain, an inept seaman whose dream is to win the coveted Pirate of the Year Award. He has stiff competition, however, from Cutlass Liz, voiced by Salma Hayek, a sexy but deadly she-pirate and Black Bellamy, voiced by Jeremy Piven, the current favorite in the contest due to the vast amount of booty he’s acquired. The Pirate Captain begins to raid ships, hoping to amass his own impressive pile of riches but seems to have bad luck when it comes to picking the right ship. Neither the boat of lepers, nor a ghost ship he invades have any jewels or doubloons, but the eager Pirate Captain refuses to give up. As fortune would have it, the next ship happens to be the HMS Beagle where he finds the nerdy, lovelorn Charles Darwin, voiced by David Tennant. Though the naturalist’s animal specimens don’t qualify as booty, Darwin, or “Chuck” as they call him, is impressed by Polly, the loyal bird the Pirate Captain claims is a “big-boned” parrot. Polly is in fact, not a parrot but the last living dodo bird and would cause quite a stir at the Royal Science society back in London. Chuck schemes to get the pirates and the dodo back to England but there’s one little problem — Queen Victoria, voiced by Imelda Staunton, hates, hates, HATES pirates.

The story makes terrific fun out of Aardman Animations’ (Wallace and Gromit) success in turning two of the most revered historical figures of the 19th century into villains. Charles Darwin becomes a hilarious buffoon as he plots to steal the dodo bird simply to impress the curvy Queen Victoria. Darwin quips, “Her bun really does it for me.” His sidekick is an ape man-servant whom he refers to as “Banana Butt.” Much to my surprise, Queen “Vicky” reveals her delightfully sinister plan for the dodo bird that doesn’t involve a petting zoo but a knife and fork (egads!). With these two terrors running around the globe, pirates are the least of Victorian England’s worries in this skewed version of history.

The stop-motion claymation is a total treat, especially in 3-D. The charm is entirely in the details and makes for a nice respite from flashy digital animation. Fortunately for the parents in the audience, the film is full of wit and wack, including a cameo by Joseph Merrick, AKA the Elephant Man.

Bottom line: Pirates! Band of Misfits turns Victorian England into a circus of swashbuckling mischief, enticing both parents and kids to climb on board. Argh!