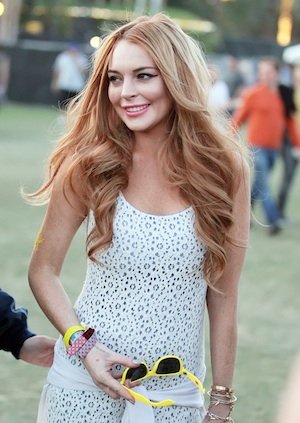 Lindsay Lohan lands one of her first major acting gigs post-probation (and rehab, and jail). The 25-year-old actress will finally get the chance to emulate one of her idols on the television screen: Elizabeth Taylor.

E Online! reports Lindsay Lohan will star as Elizabeth Taylor in a Lifetime movie titled Liz and Dick. The news outlet spoke with an executive producer, Larry Thompson, who put to rest rumors that Lohan lost the role due to her less-than-reliable reputation.

“We have wanted Lindsay from day one,” Thompson says. “She had a lot in her life that was going on. We needed to give her time to take care of her business, and while we negotiated the deal for her we prayed for her — and wonderfully she has behaved. She’s cleared herself and we’re ready to start this movie.”

We’re not exactly sure Lohan has “behaved.” She’s still received a bit of negative press with recent allegations that she’s spending time in Hollywood clubs fighting with other patrons while her dad, Michael Lohan, looks on at the drama.