Veep gets off to a great start in series premiere on HBO. Julia Louis-Dreyfus in a word? GREAT. 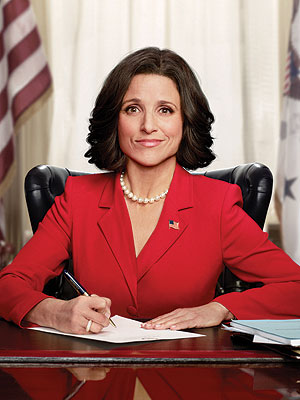 Why is it so fun to see Julia Louis-Dreyfus swear while simultaneously navigating politics in heels and a nice red dress? We always knew there was a lion under Elaine’s sometimes wacky demeanor. Christine was not your average mom either. There’s something fun about watching Dreyfus play a political shark in a suit as she swims the stormy political waters of Washington D.C. as a vice president. Dreyfus is so watchable as a comedian — she makes something as dry as politics (just watch C-span) imminently enjoyable. (I think we could watch her watch paint dry and it would be entertaining!) It’s just fun to watch her being daffy and sassy and bossy. Dreyfus excels at playing unlikeable characters — that we like to unlike so much — that we actually kind of like them! She channels our inner insecure-crabby person who succeeds despite (or maybe because of) her flaws. She’s a “veep” who asks her admin assistant every day if the president has called even though she knows the answer will always be “no.” While it’s not new to show the inner-workings of the White House, there’s something refreshing about Veep. It mixes funny with smart banter very well. (In a nod to fun marketing HBO even gave Veep Meyer her own website.)

The pilot does a good job of setting up the characters and it truly is an ensemble. Great casting makes the show that much more watchable. The vice president, Selina Meyer, is trying to get a “clean jobs” program funded and promotes “cornstarch utensils” as part of the program. This goes awry when at a meeting, the utensils melt in her coffee cup and the veep discovers she’s stepped on some very big toes: namely, that of giant oil interests. She’s forced to host a dinner in the president’s absence and inadvertently uses a politically incorrect term she heard earlier in the day from a political rival. The rest of the episode involves spin control on this gaffe and another when a senator known for sexual harassment passes away and her chief of staff signs her name to the condolence card rather than the veep’s name.

It’s a funny show. When her everyman/assistant/guy Friday “Gary” goes to do damage control and “steal” the card back, the White House staffer makes a deal that “Amy” (Meyer’s chief of staff) will have to go on a date with him. A date Amy finds abhorrent. “Do I look like a pimp?” Gary (expertly played by Tony Hale) shouts in the office but the deal is made. It’s great to see Anna Chlumsky again (as Amy).

The political wranglers/cohorts are an excellent supporting cast. Matt Walsh, as “Mike” director of communications is funny as the bumbling director who always has an imaginary dog he has to get home to walk. The breakout character is the other shark in a suit: “Dan Egan,” (spot-on performance by Reid Scott). He deftly maneuvers his way onto Meyer’s staff with each thinking they used the other. His character is so delightfully devious he almost steals the show. Watch the full episode on HBO.

The laughs are slow to start but it doesn’t matter, the performances are so enjoyable.

Veep is quick-witted, fun and watchable. My only criticism is they need to update their pop-culture references to the present day and not thirty years ago (Simon & Garfunkel and Moonlighting!? Is it 1985?) The only other problem? It was over much too quickly. Can’t wait for the next ep to air.