It’s out with the comedian and in with a rocker for Katy Perry! The singer and the Florence + the Machine guitarist, Robert Ackroyd, were photographed all snuggled up at Coachella over the weekend. 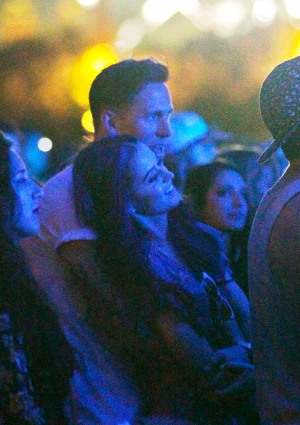 Katy Perry put on quite the show at Coachella on Sunday! Despite not being a scheduled performer at the annual music festival, prying cameras kept focused on the “Part of Me” singer and new beau Robert Ackroyd.

Taking their new romance public, Katy Perry and the Florence + the Machine guitarist were seen snuggling, holding hands and kissing at the festival, reportedly during Rihanna’s set!

Katy Perry’s new purple hair: Love it or leave it? >>

Describing the British rocker’s mid-crowd love fest the U.K.’s Sun newspaper wrote, “The tattooed musician and the leggy singer couldn’t keep their hands off each other as she flung her arms around him and they swayed along to the music like a loved-up couple.”

Katy Perry, who reached a divorce settlement with Russell Brand in February, was also rumored to be romantically involved with French model Baptiste Giabiconi. Her father, Keith Hudson, refused to comment on his daughter’s alleged romance, but insisted in March, “She is healthy and happy now!”

Despite appearing relaxed and comfortable with cameras documenting her Robert Ackroyd hookup, the 27-year-old recently vented about the price of fame. “I’m tired of being famous already!” Perry told Teen Vogue. “But I’m not tired of creating. Fame is, I think, just a disgusting by-product of what I do. It’s quite a delicate creature — it’s a wild animal of sorts. It can love you, and then it can attack you.”

Do you approve of Robert Ackroyd as Katy Perry’s new boyfriend?