Attention everyone: Jessica Simpson is still very much pregnant, thank you very much. The singer and Fashion Star mentor revealed that she hasn’t give birth yet, but hasn’t actually told us the due date. 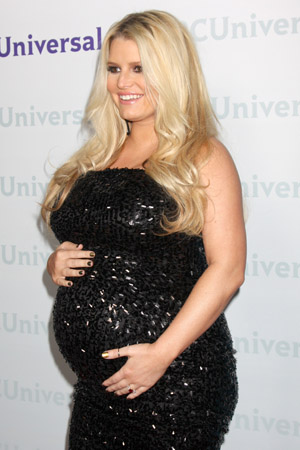 If Beyoncé set the record for shortest celebrity pregnancy, then Jessica Simpson is definitely setting the record for the longest celebrity gestational period. The Fashion Star mentor took to Twitter on Saturday to dismiss claims that she’s already given birth to a baby daughter.

“To everyone who keeps congratulating me on the birth of my baby girl,” Simpson tweeted, “I’m still pregnant!! Don’t believe what you read ladies and gents.”

We’re pretty much convinced this baby will come out of the womb as a 21-year-old wearing Louboutins and asking whether or not her food is chicken or fish. Plus, we know she hasn’t given birth because she’d have no problem telling everyone about it — just like when she told everyone of her huge appetite for pregnancy sex.

“I am definitely feeling ‘intimate.’ I’m kind of unstoppable at the moment!” she told Ryan Seacrest on his radio show in March. “Like the big ‘O’ is like the biggest ‘O’ ever.”

As for fiancé Eric Johnson? He’s totally happy for all the nookie. “[He’s] always ready,” she said.

Some doctors are saying that the former Mrs. Nick Lachey has gained way too much weight with her first pregnancy.

“Jessica has put on well over 50 pounds,” Dr. Tara Solomon, owner at The Women’s Wellness Center of South Florida, told HollywoodLife.com. “She talks about eating cheesecake for breakfast and fried chicken for lunch. She is way too big to be working out, so the weight is piling on.”

So, why all the extra pounds? Her reported multi-million dollar deal with Weight Watchers, of course.

“The deal is in place and after having her baby, she’ll start with Weight Watchers to lose her baby weight,” A source told the New York Post‘s “Page Six” a couple of months ago.

We don’t understand why she would do that for the cash, though — Simpson is almost a billionaire, thanks to her mega-successful fashion line. Guess you can never have too much money — or too much sex, right?

Do you think Jessica Simpson will give birth soon?