Justin Bieber just has one thing to say to the woman who accused him of fathering her small child. And no, he didn’t admit to being the baby daddy. 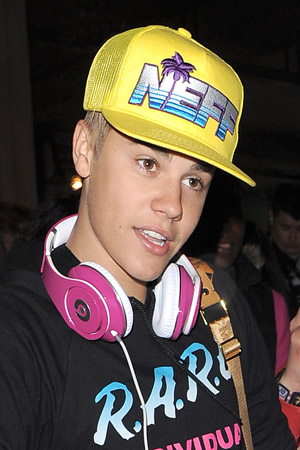 Remember last year when that random California woman Mariah Yeater came out and accused Justin Bieber of being the father of her infant son, Tristyn? Yeah, we pretty much forgot about it, too — especially after she went M.I.A. when the Biebs took a DNA test.

Well, the “Boyfriend” singer obviously hasn’t forgotten about it. On Saturday, the 18-year-old Twitter fanatic referred to the extortionist during his “RANDOMTWITTERHOUR” with a link to a YouTube video.

“And now #RANDOMTWITTERHOUR has come to an end….last one….,” Bieber tweeted. “Dear Mariah Yeeter [sic]…we have never met…so from the heart I just wanted to say…”

We figured this was pretty much a given, but we’re glad he made it absolutely clear.

He’s actually been dating his real-life girlfriend, Selena Gomez, for close to 18 months. The superstar couple is photographed constantly together, but that doesn’t mean they don’t get embarrassed when their relationship is put under a microscope. Case in point? Their Kiss Cam moment at a Los Angeles Lakers game last week.

“Oh gosh! That was probably the most humiliating thing that’s ever happened to me!” Selena told Ryan Seacrest on his radio show. “They were showing these little elderly couples, and it was so cute. Then all of a sudden we’re both looking up and we come on [the screen] and it’s like… it was so awkward. It was so weird. I mean you have to kiss, right?”

Yes, yes you do, Selena.