Susan Sarandon believes her privacy has been compromised. The actress not only claims her phone has been tapped, but she’s banned from visiting the White House! 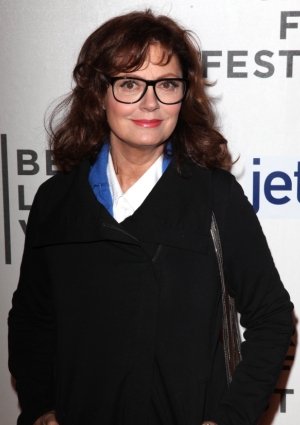 Susan Sarandon is persona non grata at the White House. The revered actress and filmmaker Michael Moore spoke at the Tribeca Film Festival over the weekend about phone tapping conspiracy theories and more.

“I’ve gotten my [FBI] file twice. I know my phone was tapped,” 65-year-old Susan Sarandon, pictured here at the Tribeca Talks Director Series on Sunday, said during a question and answer session.

“If they’re not surveilling you, then everyone else has cameras on phones,” the actress added. “I was denied security clearance to go to the White House [next week], and I don’t know why.”

For his part, Michael Moore agreed with Susan Sarandon, though appeared to be less bothered by the notion his privacy had been invaded. “I never think about it,” the documentary filmmaker said. “I assume everything I’m saying in an email or saying on the telephone is being looked at.”

Not only that, Moore believes Fox News has been up to some shenanigans, much like the Rupert Murdoch phone tapping scandal that occurred across the pond.

“I’m interested to see what happens with Fox News and phone hacking,” the 57-year-old said. “I really can’t believe it just happens in Great Britain. Because really, who cares about just hacking phones over there?”

Michael Moore continued, “I’ll make a prediction about something — I think the phone-hacking thing Murdoch is involved in… is going to be investigated, and it will be found that it’s been going on here, too. I just have a gut feeling.”

What does your gut feeling say about Susan Sarandon and Michael Moore’s phone tapping theories?