One marriage reached its end, another reached a climax and Peggy dealt with professional disappointment, in a trippy installment of Mad Men. 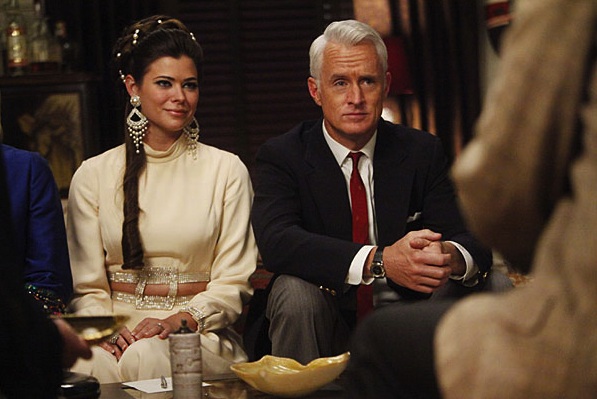 Before creating Mad Men, showrunner Matthew Weiner honed his craft (and picked up a couple of Emmys) on a little HBO drama called The Sopranos, a show that regularly and expertly played with the relationships between fantasy and reality, the legal and the illegal, and the range of highs and lows that drugs can inspire.

Compared to the capos, thugs and strippers of that critically lauded drama, the characters of Mad Men are far more strait-laced. For four and a half seasons, Weiner’s signature series has mined its stories from personal insecurities, professional realities and the nearly imperceptible, but unavoidable changes brought upon all of us by age and time.

Beneath its disjointed artifice, “Far Away Places” explored the ragged edges of three of its central relationships, as well as the very notion that any of these unions are or were built for the long haul.

The hour opened with an argument between Peggy and boyfriend Abe. She stressed about an upcoming Heinz pitch, and he lashed out about the toll her work life has routinely taken on their relationship. “Your mind is always elsewhere,” he told her. “I’m your boyfriend, not a focus group!”

Despite its creativity and verve, Peggy’s big presentation — arguably her first major pitch without Don by her side — failed to catch fire with the client. “Stop writing down what I ask for and try to figure out what I want,” the Heinz honcho instructed her. This paternalistic attitude proved to be Peggy’s breaking point, prompting her to unleash a brashness and pettiness that can only be learned under the wing of Don Draper.

“I think you like fighting,” Peggy told the client, leaning into him from across the table. “[This pitch] is young, and it’s beautiful, and no one else is gonna figure out how to say that about beans.” As reward for her aggressive position, Peggy found herself removed from the project altogether.

Later, at the movies, Peggy shared a joint (and a little something extra) with a stranger in the dark — a strain of hedonism not too far afield from the Don Draper of early Mad Men seasons. But Peggy’s rebellious streak didn’t last long: After hearing a sobering tale about geeky copywriter Michael Ginsberg’s past in a concentration camp, she dropped back to reality and found herself calling up Abe for late-night comfort.

Meanwhile, at the insistence of his wife, Roger attended a mind-expanding LSD party hosted by Jane’s therapist. After embarking on his inaugural acid trip, Roger experienced a series of hallucinations that shed light onto his hopes, fears and memories: His cigarette spontaneously shrunk, alcohol began to play triumphant tunes, his reflection looked suspiciously like Don Draper, and the emotional chasm between himself and Jane became more apparent than ever.

“I don’t see what you see,” Jane told Roger as they watched the 1919 World Series in a bathtub for two. “All I think about is having an affair.”

In the aftermath of their drug-addled evening, Roger awoke more selfless, affectionate and at peace than we’ve seen him all season. Though the mere prospect of a divorce seemed to startle and frighten Jane, Roger recognized, with startling maturity, their marriage could never truly bring them happiness. As he tenderly raised the issue of separation, Roger seemed a different sort of man than the one who had married to keep himself young. Though it seems possible that Jane and Roger did truly love each other once, that period of their lives has passed, and last night, reality finally caught up with both of them.

In the episode’s third and most tumultuous storyline, Megan and Don took a road trip upstate to check in on a Howard Johnson’s that’s currently on the Sterling, Cooper, Draper, Pryce client list. Don, who has jumped at any chance to avoid doing actual work this season, was eager to travel and to treat his wife to the joys of orange sherbet for the first time. Megan, however, expressed a reluctance to leave work behind. And so the seeds were sown for discord on the open road.

Over the course of Don and Megan’s excursion, the little nettles that pop up to test any relationship began to emerge. Before long, she was venting about her hatred of sherbet, her feelings of diminishment at the office, and the routine expectation that she is forever meant to bend to Don’s whims. In response, Don solved this conflict as he has so many others before it: He ran away. Megan found herself standing in front of the Howard Johnson’s, alone.

Don did, of course, double back to pick her up. But, much to his horror, Megan was nowhere to be found.

In the end, Don discovered his wife had taken a six-hour bus ride (and had fended off several lewd propositions for sex) back to their apartment. Finding himself locked out of his own home, Don kicked down the door and launched into an argument with Megan that soon found Mr. and Mrs. Draper racing around the apartment and shouting at each other. Their fevered chase broke a bedroom lamp, but it may have, paradoxically and temporarily, healed their relationship. “I thought I’d lost you,” Don said, clutching tightly to his wife’s slender waist as she stroked his hair.

Whatever malfunctions they may have (and there are several), Megan loves Don. And it’s become clear, over the course of this season, that Don loves Megan in a deeper, more desperate way than he ever could have loved Betty. In the weird, self-destructive world of Mad Men, theirs might actually be the strongest example of a functional, nourishing relationship. So why do I still think it’s not built to last?