Katniss Everdeen and her friends from The Hunger Games stepped down from their one-month reign as box office champion to make room for the ensemble cast of Think Like a Man. 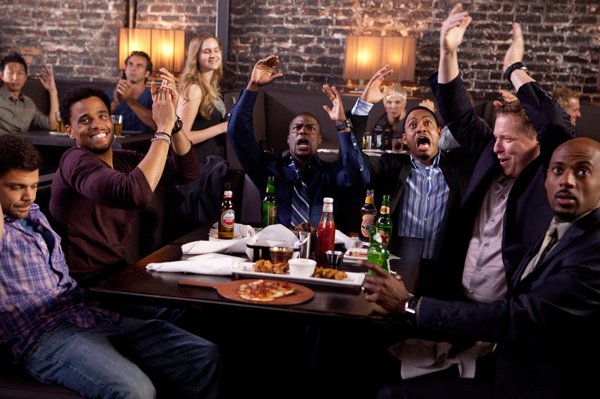 We’re pretty much assuming that everyone has seen The Hunger Games by now — that’s the only reason we can figure out why the film dropped to number three at the box office this weekend while still raking in an impressive $14.5 million from Friday to Sunday, bringing its domestic coffers to $356.9 million.

Many film critics figured the ensemble comedy Think Like a Man would help bring in the dough, but many were surprised at just how much the comedy helmed by Fantastic Four director Tim Story actually made: $33 million. The film — starring Kevin Hart, Meagan Good and Gabrielle Union — follows a group of women as they follow comedian Steve Harvey’s advice about attracting a good man.

Coming in at number two was the Nicholas Sparks romance The Lucky One, starring Zac Efron. The tearjerker brought in an impressive $22.8 million in its opening weekend, reviving hope that the former High School Musical star does have a future as a leading man after stinkers like Charlie St. Cloud. We could see this having a huge impact on Efron’s future, much like another Sparks book — The Notebook — which catapulted Ryan Gosling into superstar status.

Movie review: The Lucky One >>

Of course, it probably didn’t hurt that female fans were teased with plenty of Efron sex scenes in the film.

“[Director Scott Hicks] shot all the love scenes at the very end of the shoot and at that point we had already become good friends,” co-star Taylor Schilling said of filming the steamy moments. “I had never been to New Orleans and he knew New Orleans and we were able to hang out a bunch, so we were at that point very comfortable with each other. I think the harder part is doing some of the emotional scenes and then once those are done, it’s like, you want me to kiss you? Meh. No big deal.”

Rounding out the top five were Disney’s Chimpanzee with $10.2 million and The Three Stooges with $9.2 million. Chimpanzee — narrated by Tim Allen — follows a male chimp as he “adopts” an orphaned chimpanzee. Naturally, it’s a cuteness overload, so its success isn’t all that surprising. Plus, you know you have something special when even primate expert — and Chimpanzee consultant — Jane Goodall is impressed.

“It’s not rarely, it’s never,” Goodall told People of a male chimp adopting a baby. “It’s only ever been seen once before in all the 53 years I’ve been involved with wild chimps. It’s most unique. And the fact that it would actually happen while the film team was there, it’s almost inconceivable. It’s just amazing.”