Ted Nugent has never been one to keep quiet when he has an opinion. However, it’s easy to see that he should probably shut up when it comes to some things, based on his past sound bites. 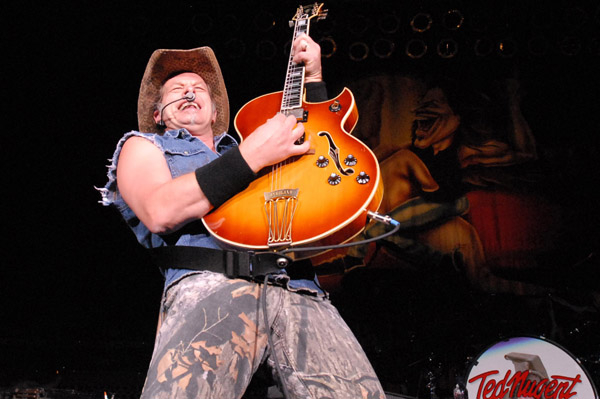 Ted Nugent is now off the hook for his “non-threats” against President Obama, thanks to his Thursday conversation with his new BFFs, the Secret Service. However, this is hardly the first — or likely the last — time the Motor City Madman has spoken his mind. Nugent has made a career out of bolstering his mediocre music with outlandish statements about everything from his taste for way younger women to hunting to minorities.

Don’t believe us? Check out 10 of Ted Nugent’s craziest quotes over the years — and judge for yourself.

The Nuge pretty much thinks you’re a hippie idiot if you don’t hunt and kill your own food.

“I don’t think they’re capable of either of those thoughts, you Limey a*****e. They’re only interested in three things: The best place to eat, having sex and how quickly they can run away. Much like the French,” Nugent said to a British journalist who asked him whether or not deer are his friends.

“Vegetarians are cool. All I eat are vegetarians — except for the occasional mountain lion steak.”

“[I get a] full predator spiritual erection” from hunting “bear, lions, coons, housecats, escaped chimps, small children, scared women and everything else that can be chased and/or hunted.”

On dodging the Vietnam War draft

Nugent told the Detroit Free Press in 1990 that he meticulously planned to get out of the war. He stopped bathing 30 days before going before the draft board and later ate nothing but junk food and Pepsi. A few days before his appointment, Nugent started defecating in his pants. It obviously worked — and it’s a good thing, because “if I would have gone over there, I’d have been killed, or I’d have killed all the Hippies in the foxholes. I would have killed everybody.”

Nugent’s recent comments about Obama weren’t the first time he blasted the president. He said basically the same thing in 2007, except he had a machine gun as a visual aid.

Apparently the Detroit Free Press is Nugent’s go-to outlet for hate speech. In this 1990 interview, The Nuge said that all people aren’t the same.

“My being there (South Africa) isn’t going to affect any political structure. Besides, apartheid isn’t that cut-and-dry. All men are not created equal.”

Nugent is well known for his “type” of women, namely women who might not be 18. His “muse” Pele Massa was 17 when they got together — he had to take legal custody of her from her parents in order to date. However, that relationship — like most of Nugent’s relationships — ended because of his love for “alternative flesh management,” or as we call it, cheating.

He’s also not a fan of strong women with independent thoughts.

“What’s a feminist anyways? A fat pig who doesn’t get it often enough?”

On minorities and non-Americans

He still has a rabid following around the world, whether he likes it or not. Apparently, he doesn’t share the love.

Also, using racial slurs to describe African Americans is totally okay if you have black friends.

We’ll give him one thing: He speaks his mind, always — and it’s hard to find that in today’s politically correct society.