A new video surfaced of Pippa Middleton partying just hours before she was caught in a gun scandal. We have it for you below. 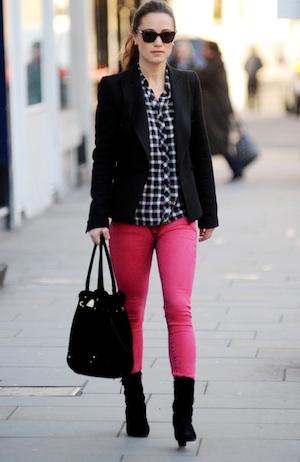 Pippa Middleton made headlines earlier this week when she was caught in the middle of a gun scandal involving French aristocrats.

We have the new video that shows Pippa Middleton partying just hours before Viscount Arthur de Soultrait’s friend pointed a toy gun at the paparazzi as they attempted to snap pictures of Middleton in Paris. At the time, it was unknown if the gun was real or fake.

Right now it doesn’t look too likely that Pippa will face criminal charges for the gun incident. Soultrait released a statement to the press on Wednesday explaining that Middleton did not participate in the gun joke and was not happy.

“Last Saturday, I was in a car with Philippa Middleton, and we were being followed by paparazzi. The car was being driven by a friend of mine, whom Pippa had only met a few hours before. As a joke, my friend brandished a toy pistol in their direction. Obviously Philippa had no idea that he was going to do that and told him to stop immediately. She did not find it funny.”

Controversy immediately arose when the photographer went public with the photos, which show Pippa Middleton with a slight smile on her face as the gun is pointed directly at the photographer.

However, it doesn’t seem Pippa can stay out of the spotlight too long. A French television channel, Canal+, briefly interviewed Middleton at Soultrait’s lavish — and quite raunchy — birthday party. According to Omg! Now the 18th century Parisian themed party included “a man in a dog collar, a dwarf and a nearly naked nun.” The Daily Mail showed Pippa in a skimpy costume. Middleton left the party around 5 a.m.