Gabrielle Union isn’t shy about heckling boyfriend Dwyane Wade — and anyone else when she watches her man play. It’s so bad, she says, Wade asked her to ditch her courtside seat. 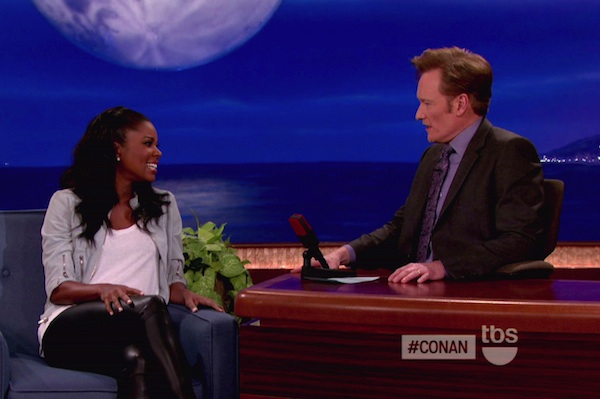 Gabrielle Union and NBA star Dwyane Wade have problems just like any other couple — well, celebrity couple to be exact. Wade asked his beautiful girlfriend to ditch courtside seating at NBA games because her intense heckling is a little distracting.

Union was on Conan last night and laughed while she explained that Wade reluctantly asked her keep it down or move further back from the court. “Oh I’m bad… I don’t sit courtside. That got killed when I became as vocal [as I am]. He [Wade] said, ‘We’re going to need you a few seats back ’cause I can hear everything.'”

And to be fair, Union says she has no problem heckling her man Wade. Union wasn’t apologetic after she revealed she often yells “air ball” when Wade misses a shot. “Whose gonna tell him if not me?” The audience roared in laughter and she also revealed she doesn’t just save her trash talk for Wade. “I heckle other players on opposing teams.”

The meanest thing Union confesses to saying? A dig about a player’s weight. “There was a gentleman — who shall remain nameless — and he was a little overweight, let’s say, and I did yell out his name and ‘Your Spanx are showing!’… And he looked like hurt and then I felt like an awful bully.”

Gabrielle Union appeared on Conan to promote her latest movie, Think Like a Man, which opened in wide release on April 20, 2012.