Jennifer Love Hewitt wants the world to see her sexy figure in The Client List promos — save for one special person. See the ad the actress fears her grandma might set eyes on! 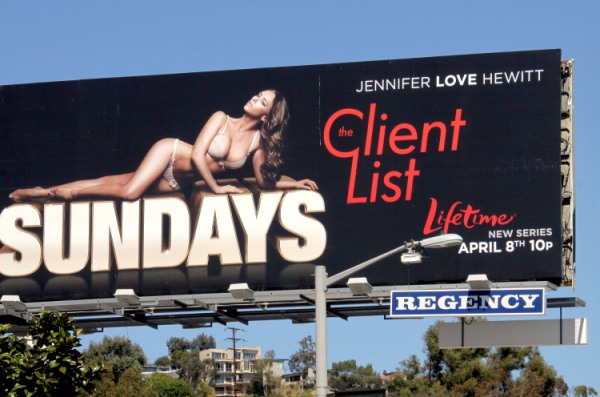 Jennifer Love Hewitt‘s The Client List ads are a sight to see, and if you live in any major city you may have seen gigantic billboards put up depicting the curvaceous star. Lucky for Hewitt, grandma dearest doesn’t live in any of the areas targeted by the show’s marketing campaign — yet.

“Thank God none of them have been put up in my grandmother’s neighborhood yet,” Jennifer Love Hewitt said of trying to keep her sexy side away from her elder’s eyes. “I’m waiting for that phone call — and I’m hoping it won’t happen.”

Grandma has already inquired about the images, however, to which the star told a white lie in response.

Recalling the question Jennifer Love Hewitt shared, “She asked me, ‘What are you wearing in the posters?’ and I said, ‘I’m wearing a bathing suit.’ And she’s like, ‘OK, well that’s great!'”

No word yet on what the 33-year-old’s other family members think of her sexy depiction. Hewitt was born in Waco, Texas, and is the daughter of Patricia Mae a speech-language pathologist, and Herbert Daniel Hewitt, a medical technician.

The Client List star can thank her mother’s friend for her sentimental middle name. Patricia Mae had Hewitt promised her college friend (named “Love”) that if she had a daughter, she would name her after her.

The first name Jennifer, however, was born of love. Hewitt’s older brother, Todd Hewitt, chose the name “Jennifer” as homage to a crush he had at the time she was born!

Do you think Jennifer Love Hewitt’s The Client List ads are too hot for general public viewing?