Ted Nugent is off the hook after the Secret Service investigated him for perceived threats against the president. What happened? 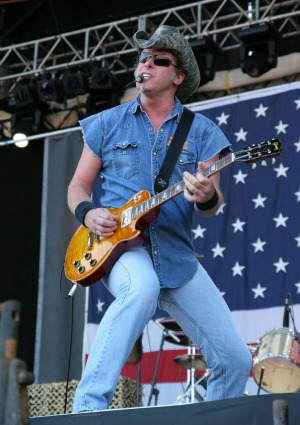 Rock star and NRA spokesperson Ted Nugent is in the clear tonight after making what the Secret Service considered threats worthy of investigation against President Barack Obama.

The Secret Service paid a little visit to The Nuge in Oklahoma, where he is prepping for a concert, and after an in-depth meeting gave him the all-clear.

Nugent denied threatening the president or anyone else. “I have never made any threats of violence towards anyone,” he said following the meeting, according to CNN.

“I met with two fine, professional Secret Service agents. [It was a] good, solid, professional meeting concluding that I have never made any threats of violence towards anyone. The meeting could not have gone better. I thanked them for their service, we shook hands and went about our business. God bless the good federal agents wherever they may be.”

“The bottom line is I’ve never threatened anybody’s life in my life,” Nugent said Wednesday in an interview with Glenn Beck. “I don’t threaten, I don’t waste breath threatening. I just conduct myself as a dedicated ‘We the people’ activist because I’ve saluted too many flag-draped coffins to not appreciate where the freedom comes from.”

Even Obama’s likely opponent Mitt Romney distanced himself from Nugent’s original comments, saying “divisive language is offensive no matter what side of the political aisle it comes from.”