When her beloved pooch goes missing, empty-nester Beth must rely on her self-absorbed husband, her over-burdened sister and a gypsy with possible psychic powers to find her disappearing doggie. Diane Keaton and Kevin Kline explore the complexities of marriage and the meaning of love in this sweet, funny film. 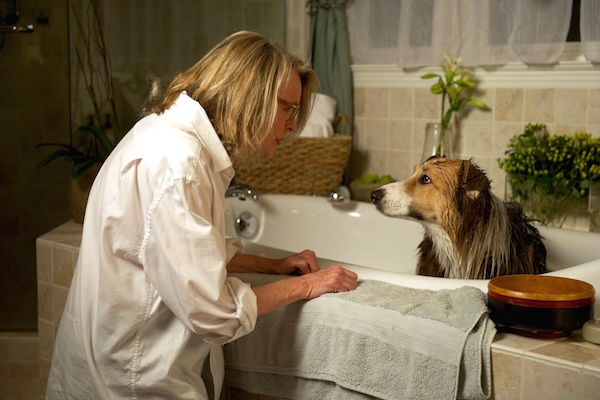 Set in the winter wonderland of Colorado, Diane Keaton plays Beth who rescues a dog off the side of the road and aptly names him Freeway. Married to Joseph, played by Kevin Kline, a spine surgeon whose own spine could use a little softening, Beth develops a deep bond with her dog that only intensifies as her second daughter Grace, played by Elisabeth Moss (Mad Men) gets married. As the family convenes at their vacation home in the mountains for Grace’s wedding, Joseph takes Freeway for a walk and while preoccupied with a work call, loses the dog. D’oh! Old resentments flare as the family searches for the missing mutt.

Carmen, their mountain home’s caretaker, played by the sexually charged Ayelet Zurer, comes from a long line of “gifted” gypsies who can “see things.” Through her third eye, she sees a vision of the dog as still alive, but where? Beth is desperate to believe her, while Joseph is dubious in his most cantankerous way. As Carmen’s “visions” send the family on numerous wild goose chases through the wilderness, they are forced to confront each other’s weaknesses, as well as their own.

Keaton plays the emotional Beth as sincere and nurturing, the true mother archetype. Of course, she loves her dog more than her husband, or so she thinks as Freeway gives love freely and never criticizes. Searching for her dog forces her to confront her need to be taken seriously by her husband. Kline makes a wonderful Joseph, the doctor who lives in a world where he is the most important person that exists. He operates on people’s spines after all, putting their lives literally in Joseph’s hands. In order to find the dog and prove his love for his wife, he must confront his own self-centeredness and inability to consider other viewpoints, particularly Beth’s. As Carmen’s “visions” send the family on numerous wild goose chases through the wilderness, the spine of their marriage becomes damaged then lovingly healed.

Bottom line: Darling Companion is a sweet, multigenerational love story about a dog’s ability to inspire faith in complex and flawed humans as they aspire to the loyalty and ease of giving love that resides in Freeway, a mere dog.