Pippa Middleton has a reason to Celebrate — and it has nothing to do with guns! Her party planning book will be released in October. Watch out, Tori Spelling! 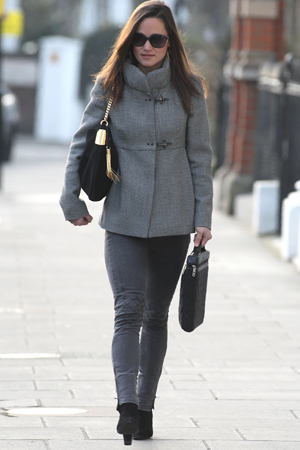 It’s odd timing that Pippa Middleton happens to find herself in hot water for sporting a gun just as she’s promoting her highly anticipated party planning book. That’s one way to rile up a crowd and Celebrate.

The event planning book, Celebrate, will be published in October, according to USA Today. It’s the final product of a $500,000 deal with Penguin Books, which she signed last year.

And Pippa knows a thing or two about planning the perfect party. Middleton — who works for her parents’ mail order party business, Party Pieces — was named one of Barbara Walters’ Most Fascinating People of 2011.

Earlier this year, everyone from Oprah Winfrey and Barbara Walters, to Ellen DeGeneres and even The Today Show‘s Matt Lauer, all entered a bidding war to be the first to chat to Pippa about her upcoming book. Their networks offered up sums of more than $450,000 in a bid to sweeten the pot. Thankfully, insiders noted that the fee would likely be donated to charity.

With this book, the younger Middleton sister joins the company of fellow party planning author, Tori Spelling. Her book, CelebraTORI, was released earlier this month. Funny enough, Tori was the one who threw her very own Royal Wedding pajama party, complete with homemade Kate Middleton mini-hats and a traditional English breakfast!

Who do you think throws a better party — Kate Middleton or Tori Spelling?

A royal in prison? Pippa Middleton in big gun scandal
Is modest hottest? 4 stars who keep things under wraps
Pippa Middleton skis her famous butt off in Sweden