Dick Clark’s sad death on April 18 at 82 means we won’t see him hosting another episode of American Bandstand or the $20,000 Pyramid. Luckily, we still have our memories of America’s Oldest Teenager — and there are plenty of great ones! 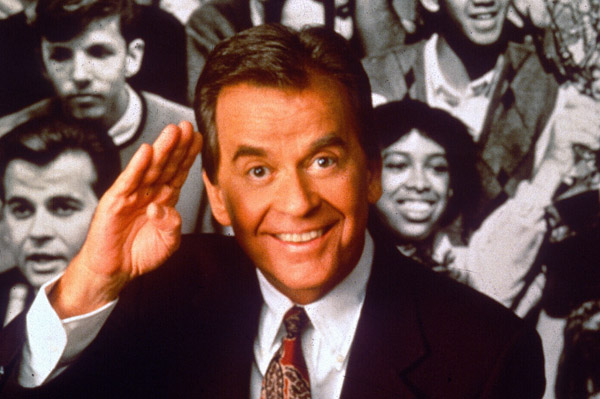 Dick Clark spent the better part of six decades bringing us laughter and entertainment as the host of American Bandstand, Dick Clark’s New Year’s Rockin’ Eve and the Pyramid game show series and as producer of shows like the American Music Awards.

Musicians react to Dick Clark’s passing: You will be missed >>

Clark’s impact on the entertainment industry won’t soon fade. And why should it? He had that sort of genuine charm and comedic timing that showed he was born to be on television. We’ve gathered up some of our favorite videos of the late star — and believe us, it was hard to narrow them down! Rest in peace, Mr. Clark.

Clark kicked off the first edition of the Times’ Square ball drop on New Year’s Eve 1974. It’s still required viewing to this day — even if it’s not the same with Ryan Seacrest as the host.

Clark basically watched Michael Jackson grow up throughout the years. In this clip from 1972, Jackson performs “I Wanna Be Where You Are” on American Bandstand.

Everyone’s favorite comedian, Betty White, gave us one of the funniest moments on Clark’s hit game show. In this clip, White shows that she doesn’t necessarily have what it takes to be a game show star.

The Beach Boys on American Bandstand

Clark was a huge television star way before color was introduced to television. In this clip, Clark interviews The Beach Boys on American Bandstand and they sing their hit “Don’t Worry Baby.”

Clark was so powerful a figure in the entertainment industry that he wasn’t afraid to take on — or playfully berate — the man who would become one of the Kings of Late Night, David Letterman, when he appeared on The $20,000 Pyramid.

Clark helped push Madonna to superstar status when he booked her on American Bandstand back in 1984. In the interview, Clark asked “What do you hope will happen, not only in 1984 but for the rest of your professional life? What are your dreams? What’s left?”

“To rule the world,” she said without missing a beat.

How will you remember Dick Clark?